Human and Art Figure in the Spherical Theater 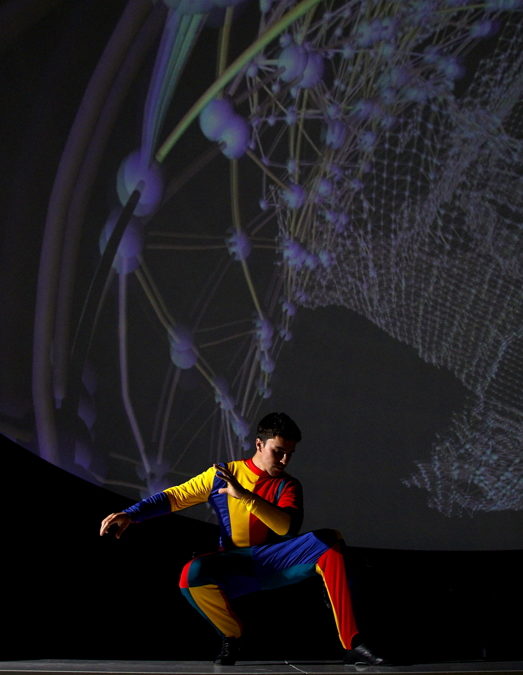 If everything turns out as expected, our new inter-medial dance production “Human and Art Figure in the Spherical Theater” will finally celebrate its premiere on Thursday, the 2nd to Sunday, the 5th of September at the Planetarium in Bochum city. Since January 2019, THEATER DER KLÄNGE has not had any other premiere, as we have created our exhibition “Theater der Klänge Bauhausbühne” and toured it internationally together with our Bauhaus repertoire within in the “Bauhaus Year”. Then came the Pandemic!

This latest creation of ours has also an indirect connection with the Bauhaus. In 1927, the Bauhaus student Andor Weininger designed in the context of a creative workshop, related to the “Total Theater”, a spherical theater which was never built. At the same time, the Bauhaus master Oskar Schlemmer developed a format for his seminar ” The Human Being”. Both: the spherical theater and the sketches for the representation of “Arts and the Man” were us, the source materials for creating our new performance “Man and Art Figure in the Spherical Theater”.

Today, the Planetarium offers a modern spherical theater when equipped with a stage and theatrical lighting. The human being will be more than just the subject of some dome projections within the planetarium performance; the human being will be the focus of our performance in the spherical theater. Nowadays, modern sensors give us the possibility to film the performing dancers and to transform these images in real time into live video art or into figural abstractions. At the same time, the dancers’ movements can modulate and sometimes even control the surround sound of the music.

We have allready used this dance-music-video-interaction in several of our stage works and especially in the pieces such as, “HOEReographien” and “SUITE intermediale” in order to create intermedial Art Works reacting live and with each other. This performance will now be a true immersive spatial experience with the possibility to realize this in a dome construction with 180-degree video dome and 64-channel spatial sound wave on a stage consisting of a podium as well as a stage oval around the planet launcher! Indeed, all these approaches brings us closer to the Utopia of the Bauhaus Total Theater design and represents for us an aesthetic as well as a technical peak in the development of such stage action experiences, as we already did in 1987 with our first realization of Moholy-Nagy’s “The Mechanical Eccentricity“.

Due to pandemic’s limited seat capacity and the fact that we have initially scheduled only four performances at the Planetarium Bochum, it is recommended to make reservations as soon as possible for this unique experience, which unfortunately will no more be performed at other venues.