The Passion of a German Principaless

Here is something for you to listen to. Not something from the mouth of an educated and wise man; No ! Only from a woman, whose name you found written outside, and whose social status you must look for below the lowest strata: Because she is nothing more than a comedian… 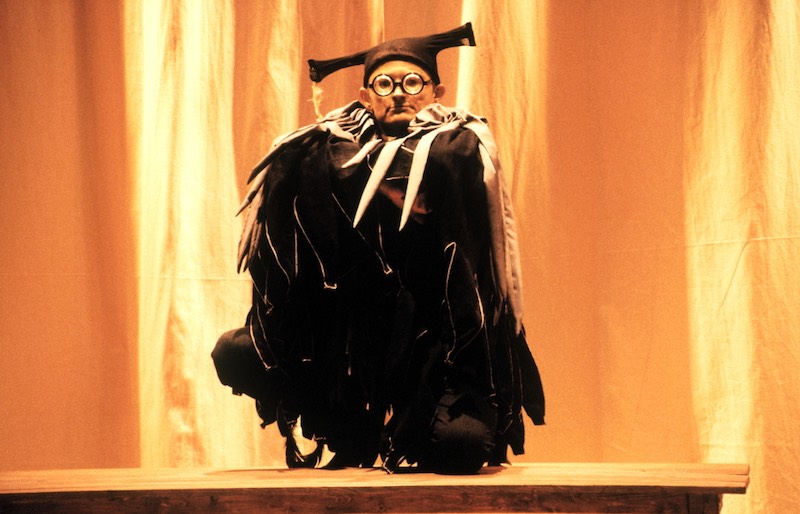 “The Neuberin – The passion of a German theatre director” was our first big theatrical book development which took up the years from 1997 to 1999.

The Duesseldorf Theater der Klaenge is back on the stage. The independent company allows the life of the Neuberin to unfold itself in a more than three hour long multimedia revue. (…) Kerstin Hoerner masters the title-role with an admirable capacity for transformation. Director Joerg U. Lensing, who worked on text with Clemente Fernandez and music, lends the patronizing count an appropriate amount of joviality. Matthias Weiland portrays Mr.Neuber and Mr. Reich-Ranicki (in a tiny episode) with spunk. The irony: the public was best entertained by the masterly Commedia dell’Arte harlequinades of Clemente Fernandez as the Neuberin’s antagonist Josef-Ferdinand Mueller.

It would all have been a diligent and meticulous research project for advanced theater study seminarians, had the Theater der Klaenge not put so much energy into the scenes. This way produces a theater bursting with life, it is not a coincidence that one feels reminded of Ariane Mnouchkine’s homage to Moliere film. The turbulent harlequinades of the contemporary folk-theater owe more to the work of an outstanding actor than to dry theory, as in the many small portraits that the Lensing / Fernandez duo have sprinkled in into their libretto.

With Kerstin Hoerner in the lead as the Neuberin, there is much to be sensed about the passion for playing of this young Duesseldorf ensemble. Through the layering of scenic and musical mediums, director Joerg U. Lensing renders transparent the high requirements which needed to be met by comedians at the time.

The authentic story yielded the subject matter for a powerful theater event, the premiere of which took place in the Duesseldorfer Tanzhaus ( “Duesseldorf Dance House”). The episodes of a life-long struggle for career and creativity, profession and calling, seemingly very relevant to our times, are being presented in a three and a half hour long marathon. Triumph and failure of this exceptional woman (1697-1760) are conjured up just like on a baroque world theater stage, with concurrent pathos and sensually. The historic transition from folk theater of the streets and market place, to an institutionalized theater of the cities and courts, becomes subject of discussion through meaningful dialogue. Addressed to also is the conflict between the stage that considers itself as an institution for moral education, and the one that serves for mass entertainment of the senses. Reference to the competition which today’s theater experiences from the musical and cinema palaces, is obvious. In the text of ensemble members Joerg U. Lensing and Clemente Fernandez, baroque melodiousness mixes itself with bulky everyday-language. The undertaking aims to reflect on the personal experience, to hold the felt conflict in question.. “Die Neuberin” doesn’t try to be entertainment – and indeed, does not entertain. The drama definitely does not want to be a lesson – and risks everything so as not to become a seminar in German theater history. Splendid outfits, designed by Caterina Di Fiore, expressionistic dances (Jacqueline Fisher choreographed for herself and her partner short unruly intermediate pieces), video projections, lavish lights and many baroque music inserts complete and add comment to the event on the big stage. (…)

Joerg U. Lensing, the leader of the Duesseldorf Theater der Klaenge has assigned to the title figure of his youngest piece “Die Neuberin ” (with subtitle “The Passion of a German Theater Director”) a beautiful line of dialogue: “New paths are not found by looking back “. For Lensing’s theater this saying is certainly valid only up to a point. In the twelve years since their inception, the Theater der Klaenge have almost always based their work on the past. They gave new life to the “Baroque Theater of Masks”, plunged back into the middle ages with a “LUDUS DANIELIS”, tracked the German revolution of 1918 and have worked as well on numerous reconstructions of the Bauhaus dance pieces. Lensing’s “Neuberin “(…) is also in multiple ways a review. (…) The piece is rich in thought-provoking aesthetic sentences and historic parallels, without however sacrificing any of their consistency.

The Theater der Klaenge have created out of this piece of theater history an exciting, highly complex, good three hour long evening (…) At first glance, dance, video-projections, scenes and music, seem to fall apart. At the base of the work however lies a very precisely composed structure as regards to content. Held together through the flow of a twelve month sequence, the cycle reminds that it has not concerned itself solely with a single fate. Texts and situations continuously reappear in variation. (…) Lensing’s text is like a score. 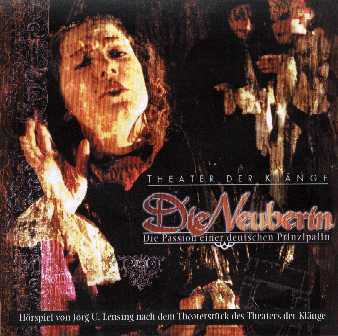 The Neuberin in the radio play

In our online shop you can purchase the original radio play suitable for this production. You can find more information about this product on the linked product page.