Theatre on Demand – Week No. 9 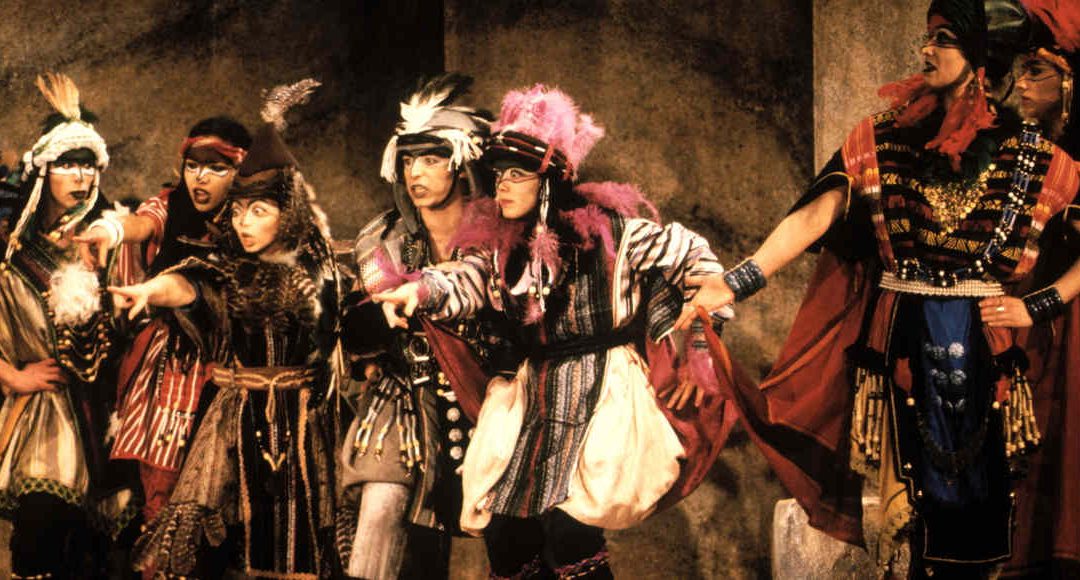 Even if everything seems to return to normal step by step:

the theatres remain closed and rehearsals are possible only under security editions from June on.

Unfortunately, the normalisation and increasingly plentiful free offering of theatrical streaming leads to less and less growing eadiness in doing donations for us. Our action started the first two weeks very well and brought us during the first 14 days 20% of our donation aim. Since that time comes again and again a donation, so that we have arrived topically after eight weeks with 35%. However, it would be nice if our action – which is planned till the end of September – further produced financial support for us.

This week we show our eighth production “The birds“ in a recording from the premiere in the year 1996:

“The birds – a comical and fantastical story inspired by Aristophanes”

The piece deals with the two “drop-outs” Evelpides (the Optimist) and Pisthetairos (the exaggerator), who abandon Athens and end up in a world between the earth and the land of the gods. It is the World of the Birds. The Birds assimilate the two into their world and turn them into one of theirs. The two convince the Birds that they have the power to rule over men and even to defy the gods. The birds are convinced and as a sign of their new entitlement, build an aerial city surrounded by a wall, between the world of the gods and the world of men. Evelpides and Pisthetairos become the architects of a “model” society, which in the shortest time reaches a position of power which cannot be ignored anymore either by men, or by the gods. The primordially paradiselike world of the Birds pays thereby the price for having sold itself, with Pisthetairos as the absolute ruler of this new world.

Aristophanes excercises with “The Birds” concrete critique on the Athenian society of his times, but also on the handling of power by humans.

The Theater der Klaenge staged the adaptation of the old material in a new mixture of mask-work, dance- “chorus”, and stage music composed specifically for the piece. The different expieriences acquired during the last two pieces seeped into the new staging.

“Die Voegel” was shown with great success 34 times to approximately 6000 spectators in 7 cities, and remains first in the repertoire of the Theater der Klaenge despite the need for an 18 actor ensemble.
In 1997 “Die Voegel” received an invitation from Salonika (Greece) to be performed in its native land alongside the “LUDUS DANIELIS“ production, and was translated back to Greek for that event !

However, this production showed at the same time also climax and final point of a formative way which is found fragmentarily still in the masque in the 1999th production “Die Neuberin“ entrance.