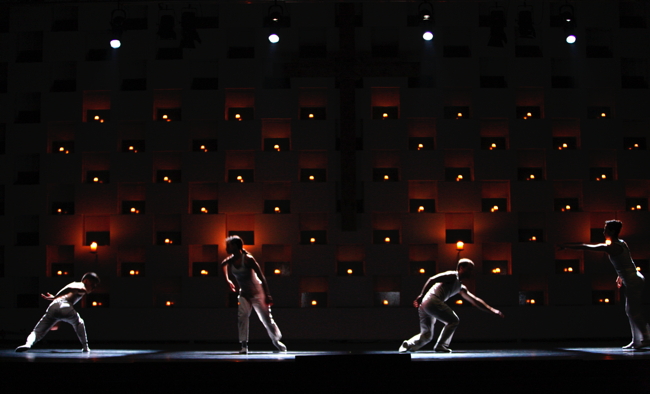 In 1751 Johann Sebastian Bach composed his last work “Die Kunst der Fuge” (The Art of the Fugue), with which he summarized his experience in contrapuntal composition for four voices in a final musical score.

A desire in the creation of choreographies, especially for the intermedia pieces of the Düsseldorf Theater der Klaenge, was to use contrapuntal, compositional techniques from music writing to create dance compositions. In contrast to some contemporary choreographers’ preoccupations with the musical work “Kunst der Fuge”, the creation “Dance Fugue” is not about dancing Bach’s music, but rather about appropriating the analyzed contrapuntal techniques Bach used for his work and translating these techniques into movement canons and dance fugues.

In the Theater der Klänge work for 4 dancers (2f, 2m), the “Art of the Dance Fugue” will manifest what visual music can create today by 4 moving bodies and how modern dance and movement techniques for contemporary dancers are an aesthetic prerequisite for this. Polyphony is to be understood literally as the expression of 4 body languages for the articulation of this ordered and thus rhythmized and harmonized dialogue of four individuals to a collective.

The recording of this production from 2016 can be seen online as part of the current Theater der Klaenge program “Theater auf Abruf”: Thursday, October 8 from 7 pm to Sunday, October 11 until 10 pm.