Theatre on Demand – Week No. 5 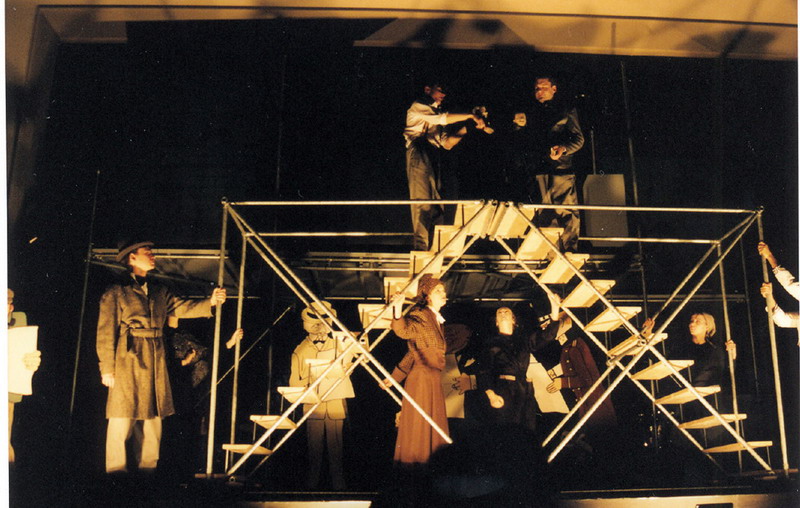 Revolution – a major theme that suddenly became tangible in 1989. In contrast to the events in the GDR in 1989, the revolution of 1918 in Germany around 1990/91 was almost forgotten.

In 1991, Theater der Klaenge compared the course of the two revolutions with each other in a large theater collage in many different scenes, which repeatedly contrasted the individual phases of the revolution of 1918 with those of 1989.

The historical outline of NOVEMBER deals with the events from November 1917 (revolution in Russia) to spring 1919 (National Assembly in Weimar) as well as with the period from May 1989 (dismantling of the Hungarian border installations) to March 1990 (new elections to the People’s Chamber of the GDR).

Acting, allegory, farce, mask improvisation, pantomime and puppetry are juxtaposed with simultaneous dance and (Meyerhold’s) biomechanics. This is embedded in a live electronic music, which is controlled by two percussionists. In addition, documentary film collages and slide projections. The whole event took place in a transformable play structure with movable screens. The international ensemble of the Theater der Klaenge became a modern comedic troupe, which presented its view of the events in simple, clearly understandable pictures and play scenes.

NOVEMBER was at the same time the first attempt of the Theater der Klaenge to create a play about a self-chosen political topic in collective authorship. The experiences of previous productions were incorporated and enabled the Theater der Klaenge ensemble to search for a theatrical form for each of the facts to be presented, which provided the most appropriate picture for the respective statement.

NOVEMBER was created in 1991 as the first co-production with the Bauhaus Dessau and was performed 19 times in Düsseldorf and Dessau. The ensemble formed in 1991 for this piece was the first to work under professional conditions in the Theater der Klänge rehearsal studio in Düsseldorf-Pempelfort, which moved into the theatre in 1991, and at times also in the Bauhaus stage in Dessau. Numerous ensemble members from this year became permanent members of staff for several productions in the early nineties. In many respects, the working principles from this time still form the basis of our working methods today.

The recording was made on November 2, 1991 by Take it Media in the Theaterhaus Düsseldorf.

Online video premiere from Thursday, 16 April at 7 pm to Sunday, 19 April 2020 (10 pm). Instead of tickets we ask for donations via GoFundMe or PayPal.