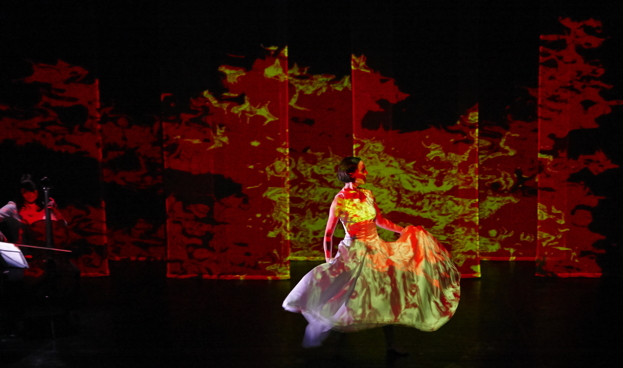 The THEATER DER KLÄNGE has been working for several years with intermedia forms of dance, electronic music and interactive live video.

As a continuation of the electronic-intermedia works HOEReographien and SUITE intermediale, a new work entitled “CODA – Bach’s Cello Suite in C Minor“ has been developed for the 2013/14 season.

The focus of the work in CODA was on the dancing interaction possibilities with light and video.

J.S. Bach’s music – and especially the dance-cello suites – are in themselves a work of variation on dances that were “old-fashioned” in their time. Bach uses the possibility of going beyond the practical purpose to expand, vary and contrapuntally reflect on dance forms still known at that time. Taking up this approach and continuing it with today’s staging and musical means, a visual music in the structure of Bach’s music was created for the six cello movements by Bach through dance and composed light.

The baroque music inspires references to the very geometric dance forms of the baroque, as well as to ornamentation in light, which in turn uses the dancing body as a moving image surface. Thus a very sensual, history-bridging work of art was created, consisting of dance to Bach’s cello music in a very modern, moving light implementation based on Baroque dance forms such as Allemande, Sarabande or Gigue.

In the second part of the program the 6 dance movements of the Cello Suite were repeated. In the repetition, however, the dancers, through their movements, were at the same time musicians of an electronic music, which takes Bach’s music as its musical material, which is played electronically through movement dynamics. The resulting media music also directly controlled the interactive video presentations of the theater scenography, which in turn quotes baroque scenic approaches.