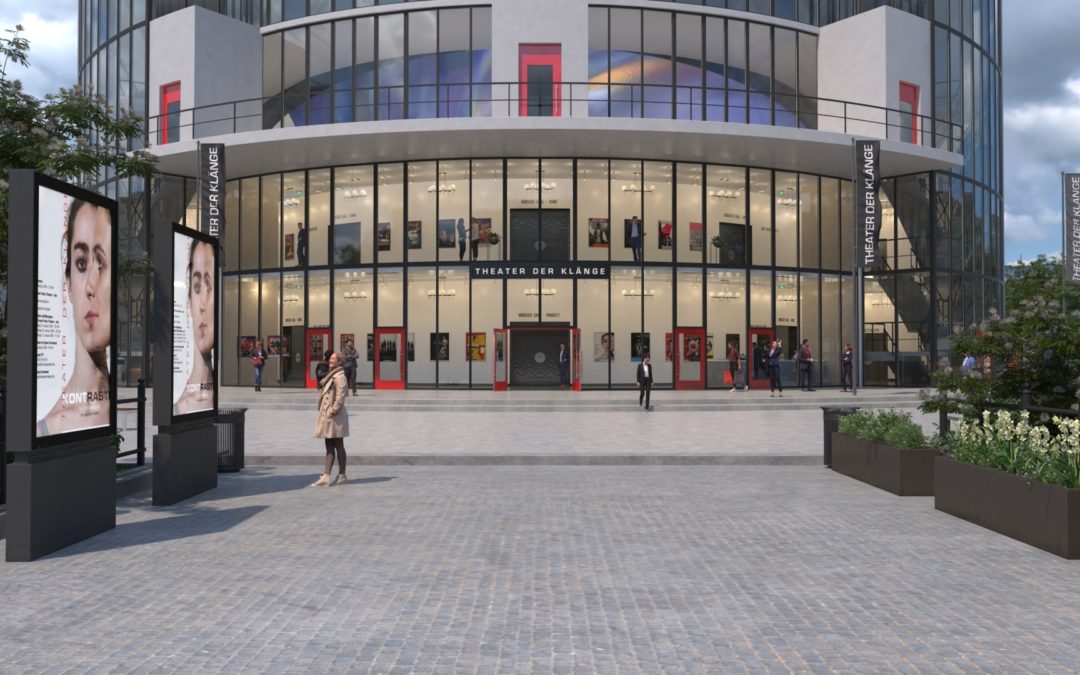 1927: The theatre-director Erwin Piscator asks the architect and director of the Bauhaus, already known at the time as an icon of modernism, if he could design a new type of total theatre for him to be build in Berlin.

The Bauhaus sets up an ideas-workshop from which, among others, the U-Theatre by Farkus Molnar and the Sphere Theatre by Andor Weininger emerge as designs. Independently of this, Walter Gropius designed a total-theatre that would allow film projections in the entire hall, a main stage and a rotating arena stage and walkways running around and between the rows as playing surfaces. He had these ideas patented!
Piscator pays for the designs, but never builds this theatre…

Sometime later, these plans are animated in a cartoon.

Further on, a Spanish game designer realises a black and white video animation in which you can fly around this theatre and into the theatre hall with a camera.

2021: As part of the programme Neustart Kultur #TakePart, the Fonds Darstellende Künste grants the Düsseldorf THEATER DER KLÄNGE the realisation of this total theatre in a modernised form as a virtual online architectural animation.

The virtual total THEATER DER KLÄNGE, based on the plans of Walter Gropius, can be walked through on screen using VR technology and equipped with media content from the Theater der Klaenge that can be accessed online, will have its online premiere on Sunday, 3 October 2021!

Visitors can expect not only a photographically accurate realisation of these theatre plans, but also the possibility to move around and in this theatre. There, they will not only move through the detailed foyers in Bauhaus design, but will also have the opportunity to enter the theatre hall, which still looks modern today, and watch complete performances of THE THEATER DER KLÄNGE as videos. They can also visit the library and media library or the gallery in the building, or book video-workshops in both a theatre and a dance rehearsal studio. In the library and media library they have access to a large number of written and graphic documents, as well as to sound files and photos of all productions of THEATER DER KLÄNGE.

An online archive of the entire almost 35-year creative output of THEATER DER KLÄNGE in a digitally sensual form. At the same time, however, the first realisation of the total theatre designed by Gropius for a concrete theatre use, even if this can “only” be experienced virtually!

The project is supported by the Fonds Darstellende Künste with funds from the Federal Government Commissioner for the Arts and Media as part of Neustart Kultur.