The young girl’s dream of singing and especially of dancing.
What does the young body know about sprained ligaments, arthrosis, gout, paralysis and Parkinson’s Disease let alone about multiple sclerosis?
How powerful is the dream of being a ballerina against physical wear and tear and even bodily decay? 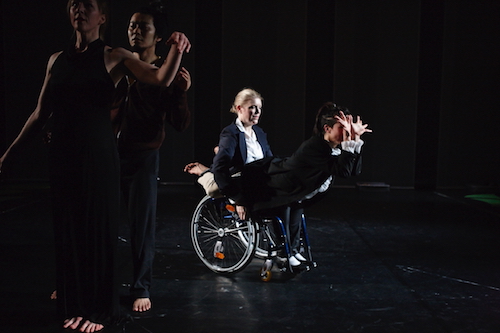 Jacqueline Fischer, long-standing dancer and choreographer for the Dusseldorf THEATER DER KLAENGE, worked 2015/16 on her second evening programme. After having created the very successful evening of dance entitled “Ich ist ein Anderer” (“I is another”) for the THEATER DER KLÄNGE in 2008, this piece was dedicated to “Contrasts” the feeling of being free within performance-oriented societies – such as the one in Germany.

The play was premiered in January 2016 at the Forum Freies Theater – Juta Dusseldorf.

Every year since 1987, the Theater der Klänge has enriched the Düsseldorf theater scene with ambitious productions with small, yet subtle, innovative accents. Last year, a revitalization of Oskar Schlemmer’s Triadic Ballet met with supraregional interest and now Jacqueline Fischer’s second full-length choreography was premiered in the Forum Freies Theater.
Contrasts is what the Greek-born Folkwang graduate calls her 75-minute work. Their attachment to the dance theater Pina Bausch is undeniable. The boundaries between music, dance and spoken theater dissolve. There is one singer and five dancers from six countries, including one suffering from multiple sclerosis American, who brings in a dance, even if she several times, a little tricky with her illness coquettish, occurs in a wheelchair. They all seek “contact,” with the episodically fragmented piece reflecting approach and integration attempts that are playful-improvisational. Even though all of them are outwardly adapting to the anonymous and equally brushed metropolitan bustle, which is indicated by neutral costumes and traffic noise, they can not shed their different origins. Luckily, as video clips and some dream sequences show. In it appear the actors from Germany, Chile, Greece, Japan, the Congo and the USA in national costumes, partly stylized to mythical sculptures. At the same time Fischer does not hesitate to play with clichés. America is rocking in Yankee doodle revelry, and the African does not hide his physical-sensual presence.
Even if the cultural differences in the everyday life of the meritocracy are leveled, there is no real dissolution of the barriers. One adapts more or less successfully to the constraints of the business pull, people do not get any closer. There remains a stale taste of loneliness in the crowd. The dancers move and present themselves individually, so that the impression of a closed and coalesced ensemble can not and does not stop. The musical, by J.U. Lensing’s mixed soundscape is dominated by rhythmically pulsating, electronic noise pulses with strong associations with urban noise. Individual folkloristic interjections, including an upbeatly cheerful version of the Yankee Doodle, seem truly exotic in this environment. Just like the contrast of the “video scenographies” by Oliver Eltinger with their memories of the origin of the excellent dancers. The soprano Barbara Schachtner enriches the interdisciplinary project with settings of accurate statements on the threat of individuality from Rousseau to Nietzsche. Among them is Kierkegaard’s key phrase: “Comparing is the end of happiness and the beginning of dissatisfaction”. Sentences that, of course, in view of the very high chants, can only be understood in the program booklet or on overlaid projections.
The audience responds with long-lasting applause to a completely stimulating and thoroughly innovative performance of the Theater der Klänge, which will also go on tour with this production.

“Freedom also means being allowed to choose one’s own dependencies,” says the Austrian poet Ernst Ferstl. Quotes like this and timeless worldly wisdom pervade the new production of the Düsseldorfer Theater der Klänge like a red thread. Projected onto the back wall of five simple fabric elements for appearances and departures, they support the small scenes and solos of the choreography contrasts of Jacqueline Fischer, the longtime dancer of the free group. Not only different nations, but also artists of different genres meet together. The soprano Barbara Schachtner – first voiceless in the dirndl, then singing in the long black cultivated – performs verse by verse the poem “Everything is vain” by Andreas Gryphius in the setting of J. & Lensing, the composer of the evening and artistic director of the theater. Pieces of puzzle pieces made of green plastic foil join the rather strict, tall Germans to each other, pushing them here and there. But the picture does not want to succeed. After all, six segments eventually form the globe.
Metropolitan and everyday noise contrast with birdsong. In characteristic local costume or presentation, the dancers provide insights into the folklore of their homeland: the native Chilean Camila Scholtbach, the grown up in Greece Phaedra Pisimisi, the Japanese Yuta Hamaguchi and the lunatic-fixed Congolese Arnoud Samba Nkassa. The spirited American actress Ilya Parteneau storms onto the stage as a cowgirl – but then portrays a young woman suffering from progressive multiple sclerosis and gradually coming to terms with less and less freedom of movement – heroically, right through to a wheelchair duo with Phaedra Pisimisi.
It is about the so much evoked contrasts in individual destinies, all areas of life and between cultures, but also about the unfulfillable demands in our society. Contrasts is a complex production.

It used to be easier, at least sometimes it seems like that. Today, social change is becoming more and more complicated, faster and faster. The Theater of Sounds always reacts to social changes in its pieces; Since 1987, the troupe, under the direction of J. U. Lensing, is dedicated to the interplay of dance, video and music. The new reaction: “Contrasts”, which now celebrated premiere in the FFT Juta before full house. Lensing himself is responsible for the music, a beguiling collage of electronics, percussion and everyday sounds. The choreography was taken over by Jacqueline Fischer, whose “Ich ist ein anderen” 2008 was shown with great success. So now the “contrasts” of the former ensemble member and the Pina Bausch student. What is there to see? This question is not so easy to answer. The contrasts she means exist first of all between the people – different skin colors, different costumes. An American cowgirl gives the Rhenish Frohnatur, a foreigner who loves Dusseldorf and the carnival. She’s fine, at least in the beginning. But behind all the “Yankee Doodle Dandy” -get is the fate of a disease, in her case, multiple sclerosis. Again and again she will appear, on crutches, in a wheelchair. Whether this has anything to do with the pressure to perform globalization is an open question.
In any case, it’s a voice from the crowd how the whole ensemble is a mix of destinies, voices and costumes. The Congolese dances with the Japanese, everything happens simultaneously. A singer with a classical song holds everything together, but is also a warning. On the video screens clouds rise, there are also programmatic quotes to see whose meaning is not always very clear. “Almost everywhere where there is happiness, there is joy in nonsense,” it says there by the quotation Nietzsche.
The most convincing “contrasts” is where it shows the difficulties of the individual in the modern world. Sirens and street noise penetrate through the idyll of nature, which the urban man longs for and which he can not reach anymore. Here, the traditional and contemporary mix in the dance language, the drums to a soundtrack, to which the movements of the dancers seem like a defense. In the end, the colorful costumes have served their day, functional clothes have become black mourning clothes. This is how the contrasts become a requiem. Great applause.

Obligations and limitations dominate the social discussions. Freedom seems to be a distant utopia. The choreographer Jacqueline Fischer has now worked on the topic of “being free” in performance companies a piece with performers from Germany, Greece, the United States, Chile, Japan and the Republic of Congo. “Contrasts” is the name of the new production of the Theater der Klänge in Düsseldorf.

For many years this ensemble brings together all art forms in ever new combinations. “Contrasts” is a music and dance theater with acting, video art and electronic music. Jaqueline Fischer wants to explore people’s abilities, regardless of their background, age, illness or education.