A comedy about our time 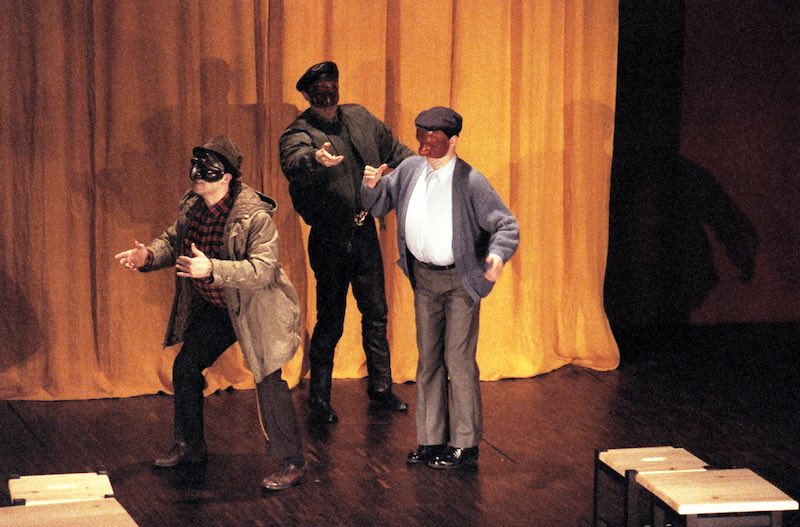 “Reden ist silber…” is the title of a piece authored by the entire ensemble of the Theater der Klaenge, and which deals in the present of the year 1993/94 (there is a more current 1998 version) with the core motif :“communication”. A palette of typical contemporary characters was created with the help of masks derived from the half-masks of the italian “Commedia dell’Arte”. These types encounter each other in the most different situations and groupings, which respectively point out specific communication conflics. One encounters thereby the historical “Commedia dell’Arte”figures of the “Capitano”, the “Pulchinella”, or the “Harlekin” in their modern equivalents, as well as many newly found stylised mask-characters.

Theater is in this piece as it was in the historic “Commedia dell’Arte”: a place to tell history. For example the story of Harlekin – Raadji, a young turk, who attempts to find his luck in Germany after completing his military service duties in Turkey, and who finds himself confronted by a hostile and brutal society; or the story of Jupp, an old warehouse man, who loses his job, and experiences the loneliness brought on by his new senseless circumstances; or Polichinell – Toni, who does everything he can to be aknowledged by the german upper-class; or Brighella – Ali, the moroccan who cleverly and unscrupulously infliltrates himself into this society, or, or, or…

The 25 scenes contain thereby a kaleidoscope of most different kinds or encounters and a weaving of relationships between the various characters, who by the means of comedic acting and wit, either master their respective speech and communications problems, or fail at them…

“Reden ist silber…” is a comedy about our times in the style of a “contemporary Commedia dell’Arte” ! Reden ist Silber… was performed alltogether 19 times in 5 different places. In 1998 a version current to the times was worked on for 8 more performances at the Theater der Klaenge Retrospective. The piece represented for the ensemble a reaction to the previous “Figur und Klang im Raum” (“Figures and Sound in Space”), and is once again a political play. It was created in collaboration and as the last part of the trilogy “Theater der Klaenge and Bauhaus” .

In its piece “Talk is of silver…”, the “Theater der Klaenge” bring problems from the present to the stage with comedic lightness and discover the lacking ability to communicate as the root of much evil. (…) The true-to-life topics find their contrast in the face of the eight actors: The ” Theater der Klaenge ” plays its contemporary characters with the help of half-masks, derived from the Italian folk theater of the 16th to the 18th century (Commedia dell’Arte). For the ensemble, a return to ” real theatrical form”, for the spectator, equally strange as interesting (…) In a colorful series of 25 scenes filled with tempo , the authors allow the 13 characters to collide with one another without restriction. The piece exposes arrogance, ignorance and intolerance as hurdles on the way to dialogue and shows the end of all communication in the game-parlor… “Reden ist Silber” a comedy about our times, revealing, clever, played in part brilliantly – a successful mixture of theater, dance and music, agile behind stiff masks.

As dismal the topics, so entertaining the representation of the steeplechase of misunderstandings and lack of understanding, which is completed by Raadji and Jupp. Because unemployed and unemployed are not alike. It depends primarily whether one is Turkish, Spanish, Moroccan, Greek or German. Regarding one’s ascent up or descent down the career ladder, it is also not unimportant whether one speaks high German or masters only flat Rheinish German, in which case “Arbeit” (“work”) is quickly confused with “Orbit”, and soon “Leck mich anne Tesch” (“kiss my bag (back)”) appears as the only possible answer to all problems . The eight actors, some in double rolls, have very well succeeded at the amusing exaggerated representation of the types in gesture and language.

Scene after scene join themselves to one another like a weaving, their outlines only becoming clear in the course of the play. (…) The piece “Reden ist Silber”, which has originated directly from the play of the group with the theme communication, without a written original, turns the circumstances through the reversal, the grotesque into a dance, in order to bring us closer to them. What they have demonstrated at the meeting place of the theater, and to what they are able to inspire, is sensitivity to the smallest building blocks of social reality: the infinite encounters and situations between people of different milieus and cultures with their diverse abilities for expression and communication.

Brilliant play with masks out of the Rhine region (…) The stage is swept by a new type of intense folk theater, prevalent in the Rhineland dialect, which doesn’t simplify the plot in the cheap black-versus-white manner . (…) The eight person ensemble slip into 13 different roles rich in variation. Each is bursting with life. The result: an unusual theater evening (…), through a not less unusual musical accompaniement, (opened piano strings, Psalter – and drum). (…) approximately three hundred visitors held out until a half hour after midnight and celebrated the Rhine ensemble for their engaging play with loud applause.