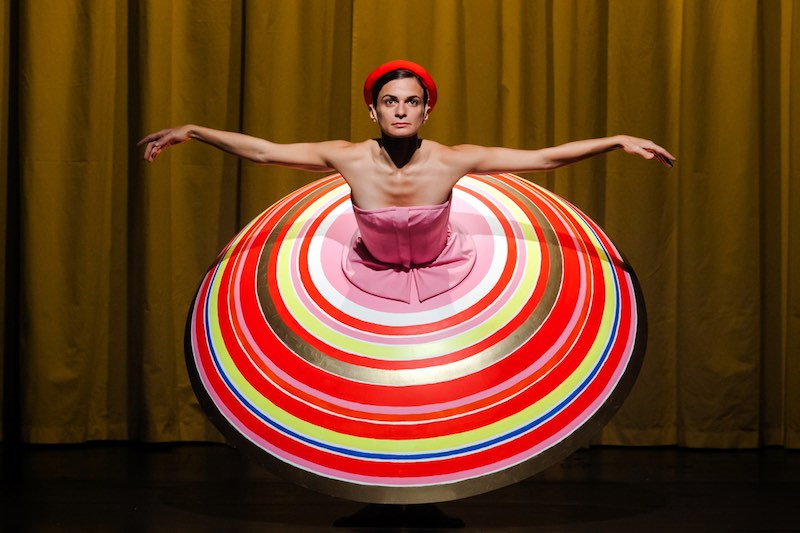 THEATER DER KLÄNGE deliberately started in 1987 with an aesthetic reference to the Bauhaus theatre of the twenties.

“Das mechanische Ballett” goes back to two photos as well as descriptions of the former Bauhaus student Kurt Schmidt, which are documented in the book “Die Bühne am Bauhaus” (1923). In 1987 we attempted to reconstruct the figurines depicted in the book.

In the reconstruction process a new choreography as well as the composition of a new stage music for piano, trombone and percussion were created. The piece was already a great success with the public in 1987/88 and has since been performed almost 200 times: in many theaters in Germany, but also abroad, including France, the Czech Republic, the Netherlands, Greece, Russia, Israel and India. It has now been in the repertoire of THEATER DER KLÄNGE for 30 years. We are the only ensemble in the world that has both recreated this ballet – originally created for the 1923 Bauhaus exhibition in Weimar – and can currently perform it live.

In 2015, under the title TRIAS, the THEATER DER KLÄNGE then reinterpreted “The Triadic Ballet” – based on a design by Oskar Schlemmer from 1922. The first 11 scenes correspond in their formal structure as well as in their figurine implementations as much as possible to the sequence of the premiere as Schlemmer himself performed them in 1922/23 in Stuttgart and Weimar. Unlike previous reconstructions in the 1960s and 70s, our approach to reinterpretation concentrates on the humorous, grotesque, even carnivalesque elements in this figurine ballet. All choreographies and music to the individual movements are therefore, as is the concluding 12th scene, new creations of the THEATER DER KLÄNGE.

Our full-length program “bauhaus ballets” united both productions in 2017: “The Mechanical Ballet” and “TRIAS – The Triadic Ballet”.