The swansongs to the big cities

The city is not the streets, the parks, the buildings. So it’s not the people either. It’s the relations. It’s living together, it’s cooperation. That’s it. 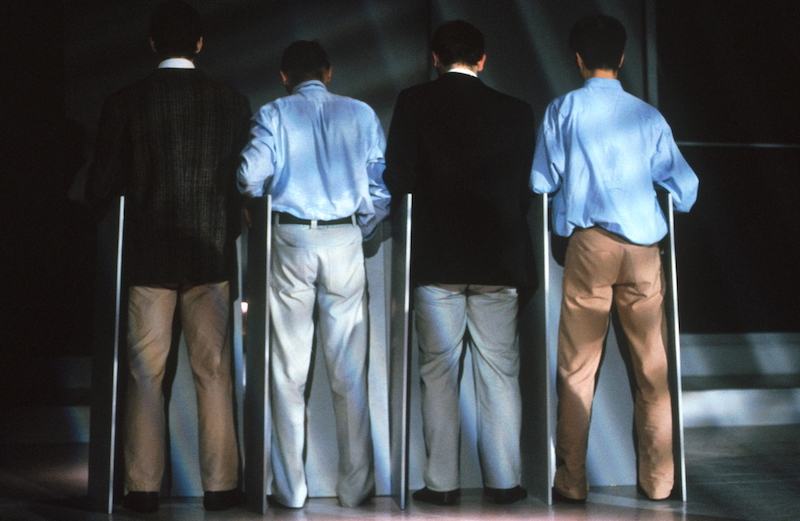 The scenic material was created in collective improvisation by all participating actors in collaboration with director and choreographer with the temporary participation of Anan Atoyama, Gerald Butolen, Julia Leidhold, Agnieszka Obuchowicz and Dilruba Saatci.

“MEGALOPOLIS – songs about the Megacities” was our creation for 2001:

10 authors from the 10 biggest towns of the world wrote at the request of the Theater der Klaenge in each case a song text on the development of their town into a Megalopolis (cities with more than 10 million inhabitants). These 10 texts – written in the respective national language – were libretti for “song compositions”.

In cooperation of the composers Thomas Neuhaus and J.U.Lensing, as well as the actor Clemente Fernandez and the singer Birgit Wegemann originated settings of these “songs”. Besides, the interpreters used their vocal qualities for the interpretation of the respective texts. Both oral interpretations were tonal material for an electronic-sound subsequent treatment. The mixture of direct voice and electronic subsequent treatment proved the real song composition. These “songs” were orchestrated in each case with a soundscape of the city.

Continued interesting for the interactive and intermedia work at the Theater der Klaenge and for the first time since “figure and sound in the space”, Megalöopolis marked the beginning of the use of gestural controlling of the vocal sound modulations by the interpreters themselves: With the help of a camera-based “Tracking Systems” the body movements and space movements of the Performer could be moved in data for the electronic transformation of the voices. The interpreters became therefore not only by their vocal properties acoustic megaphones of the texts, but also by their action – or the action of dancers modulators of their sound-material. The whole live generated music was a basis of a total of 10 dances which were choreographed by the guest choreographer Carlos Cortizo.

MEGALOPOLIS was in its electronic-interactive work an establishing production to the 1993rd first essay of “figure and sound in the space” and starting point for the substantially more interactive, intermedia subsequent productions “Modul|a|t|o|r”, “HOEReographien”, “SUITE intermediale”, “Vanitas”, “Coda” and at last “The lacquer ballet”

The soundtrack and the texts to this piece were continued in an audio book with the same title, which appeared in 2003 in the label HoerZeichen-Verlag. This audio book was chosen in 2004 in the audio book top list of the german radiostation hr2.

Since the debut play “Mechanische Bauhausbühne” in 1987, technical perfection has become the trademark of the Düsseldorf ensemble under the direction of Jörg Lensing. The new piece also captivates with its detailed interplay of choreography (Carlos Cortizo), lighting design (Christian Schroeder) and sound carpets with engine hammers, electro beat, sacred chants and foreign-language voice fragments – musical development Jörg Lensing, composition Thomas Neuhaus.
The strength of the whole evening lies clearly in the musical innovation of the bizarre carpet of sound, which atmospherically dominates the stage events concertante and harmonises with the perfect lighting direction. The result: deserved long applause from the premiere audience.
NRZ, Düsseldorf

The first experiment by Jörg Lensing and Thomas Neuhaus – former friends at university and long-time explorers of the interaction possibilities of representation, movement, technology and music in stage space – was “Figur und Klang im Raum” (Figure and Sound in Space) in 1993, an event with a cool and technical effect at the time. “Megalopolis” can now be seen as the mature version of this development, one that now also hits the soul. And this development is still not finished. Lensing and Neuhaus have currently limited themselves to the control of the tonal level that is possible through the actors.

But that is only one aspect of this piece, and not at all a more obvious one. The theme is life in the big cities of this globe, globalization, also in the worldwide cooperation of artists.
Ten artists from ten megacities have written texts for it – beautiful, very different texts. Nine artists from eight countries dance them. Original sounds from the big cities are captured.

The texts, recorded in the original language, interact with their translation spoken on stage. All this works together. In addition, the actors, who empathize with the atmosphere of the respective city, feel its people and bring it to life in many small everyday scenes.

A world trip from Manila via Cairo, Los Angeles, Osaka, São Paulo, Bombay, Mexico City, Seoul, Tokyo to New York. All this in two hours. The flood of stimuli has to be endured. “Megalopolis”, a piece as lively, lively and exhausting as these cities are.
Rheinische Post, Düsseldorf

In metaphors, as fast chains of associations, in fictitious self-talks or with a political reference to time, the texts draw cityscapes that become landscapes of the soul and thus reveal the authors’ love-hate relationship to the mega-cities of this world. The text material serves the theater makers as the basis for a dance theater performance in which the texts of nine dancers are translated into movements and made audible by a speaker and a singer. Their voices, embedded in characteristic soundscapes of the respective cities, are alienated with the help of computers and thus transformed into sound material. A functional lighting design creates different spaces and moods in which dancers and speakers can act.

Instead of a coolly calculated high-tech theatre, Jörg Lensing (musical development) and Thomas Neuhaus (composition, programming) succeed in presenting the metropolis as a projection surface for human dreams in a contemporary way as uncontrollable, gigantic networks of relationships, between whose strands snapshots flash out of the metropolises.

Often enough they rely only on the charismatic and accentuated natural speaking voice of Clemente Fernandez and the clear singing voice of Birgit Wegemann, who deliver the soundtrack and the swan song to the megacities with the texts spoken in the original language. In Manila as well as in Cairo you look for the god of the city, who fascinates and repels the people. In Seoul one looks for his places of sacrifice, in Los Angeles one finds him in movies. The search for the god of the city, which is already conjured up as a personification in the famous expressionistic poem by Georg Heyms, also runs through the texts of the city dwellers.
WZ, Düsseldorf

Between fascination and curse shimmer the texts of the ten respected authors from various countries… Loud, hectic, violent and narrow – these are perhaps the most common denominators – and yet the composers Jörg Lensing and Thomas Neuhaus managed to work out their own cultural influences. They composed a dense sound ambience from the collected material, in which 1 actor and 9 dancers set the stage for everyday life full of life. Exciting! how the illusion of the foreign hustle and bustle succeeds only through the sound backdrop. With a lot of wit and imagination and minimalist means 10 choreographed swansongs to life in the megacity were created. The “Theater der Klaenge” found inspiration in numerous illustrated books and films, but above all in itself! In the cultural wealth of experience of the internationally composed ensemble.
WDR 5 Funkhaus Europa

Whether Mumbai, Los Angeles or Cairo – a single, very neutral stage space is sufficient for all this. So the 10 pictures are not a folklore show of global urbanity, they are rather a very complex listening and viewing experience. Danced, sung, spoken, recited and conducted at the mixing desk. The dance company not only fits into the rhythm, it also shapes it. In his choreography, Carlos Cortizo has almost always met the basic gesture of libretto poems. The oriental flow of a wild marathon mess in Cairo. Osaka as a city of melancholic memories, where cyclists and pedestrians once left themselves to time. The steep gradient of rich and poor in Mumbai. Tokyo’s coolly distanced, automated gainful employment. With great sensitivity, the composer and director have ensured a good balance between physical and lively stage action and its interpenetration with technically produced material. Thus the soprano Birgit Wegemann remains as present in her sovereign intonation and voice guidance as the speaker Clemente Fernandez. Singing, dancing, electronically conjuring, speaking and playing, the “Theater der Klaenge” in Düsseldorf unfolds a world painting, threateningly chaotic, sometimes witty – and finds a megalopolis interpretation in its collage, not least due to the eightfold colourfulness of its ensemble members’ nationalities.
Saarländischer Rundfunk – Blickpunkt Musik 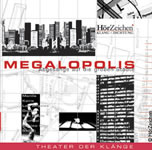 In 2003 we published a radio play about our production in HörZeichen-Verlag. For each of the treated pieces there is a specially “sung” version of the songs written by our ten authors. More details can be found on the product page!