My troupe, which consists of musicians, comedians and dancers, will present you in many short scenes a glimpse of the various possibilities of dance in it’s many different forms. So that in this “Theatro” not only dance receives a fair chance, we have connected the different dances with comedy sketches, which introduce the dances or tie them together. 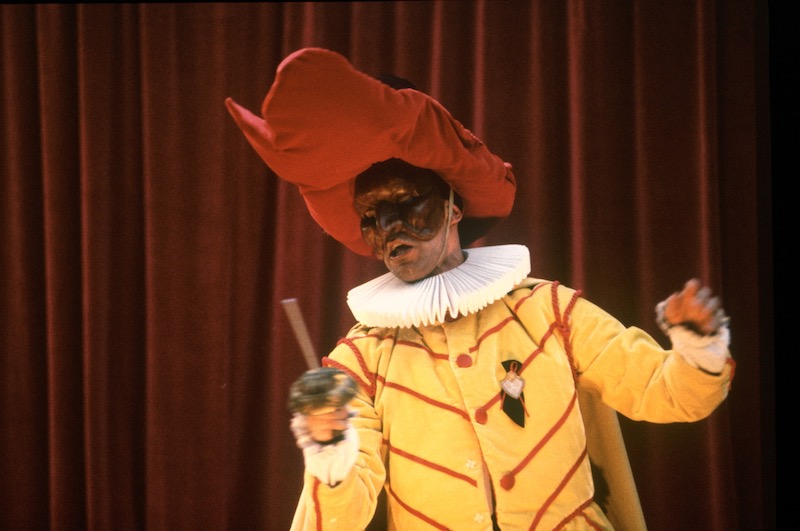 Cast of the world premiere on April 6, 1989 at the Malkasten Düsseldorf in the sequence of scenes:

Lambranzi’ work concerns itself with the mixture of different theatrical styles of his time, which are mainly defined by the fact that there still had never been a separation between music, dance and acting.

Basing himself on the music and dances of his time, as they were treated on the one hand by the people, and on the other by the court, he designed through 100 sketches a catalog of scenes, which portrays both the regular, professional and theatrical types of his times, as well as the court dancers and grotesque characters in scenic and dance sequences.

The Theater der Klaenge revived Lambranzi’s dance- and -comedians troup, inspired by the sketches and their inherent baroque aesthetic, in order to show a genre picture of late baroque dance-and-music theater through a combination of baroque court dances, folk dances, dance parodies, play of masks and the stage character of Lambranzi (as well as his wife).

This theater is defined by a half-open touring company type of construction, candle lighting, opulent costumes, Commedia dell’Arte characters, a theater-and-dance music of ist own, and a type of staging in which body language renders the spoken word to a large extent obsolete.

Die barocke Maskenbuehne, created in collective collaboration of the members of the Theater der Klaenge and written by Joerg Lensing, is not a reconstruction of historical theater, but much more an involvement with another, not literary and therefore pre-middle-class form of theater.

In the new music composition, new choreography of the dances, and new staging of the entire material, the “Baroque Theater of Masks” deals with a contemporary theater piece, which proves the possibility of “another” type of theater based on a buried tradition, through the masks of the Baroque, as an artistic challenge and test till today.

Die barocke Maskenbuehne has for this reason experienced between 1989 and the present 5 different versions, with the masks, costumes and scenic ideas of Gregorio Lambranzi, as it was the case in the original Commedia dell’Arte.
Each time a new ensemble was put together for a new version, it improvised with the previously found materials, characters, lazzos and dances (and sketches), so that out of each improvisation phase a new version could come into being based on the same aesthetic point of reference.

Work with the Commedia dell’Arte masks is since 1988 an integral part of Theater der Klaenge and constitutes a basis for examination and training of new admissions.

The 5 versions, in the same way as street theater variantes for the “Festival at Avignon”, lived in 1993 altogether 55 performances in 7 different places and have been seen by approximately 10.000 spectators.
The work with masks led in 1994 to the creation of a contemporary piece under the title “Speech is of Silver…”

The Baroque Theater of Masks: Press

“The Theater der Klaenge shows us with breathtaking perfection its “Baroque Theater of Masks”. The latest of this company has nothing to do with the trends of our times. This, which on the stage has such an outlandish and bizarre effect, that it appears to have come out of the future, are in truth fantastic ideas from the deep past. In wonderfully fashioned costumes, and in front of a continuously changing scenery of Italian landscapes, artistically painted, the Theater der Klaenge awakens memories of old theatrical values. It is a feast for the senses, acted, danced, full of nonsense and overacted to one’s hearts content, so as to cause the stage to wobble.”

” It proves itself to be a veritable feast for the eyes and ears. Things unfold classy to the last detail, on the glaring red stage of the traveling theater, in colorful fireworks of skillful drolleries, quiet pantomimes and funny mishaps, harlequinades, tricks, Venetians, as well as other comedy forms. With no coherent story to speak about, one is entertained to the utmost during two hours of the purest form Commedia dell’Arte. Lambranzi’s baroque ideas prove themselves freshly alive – thanks to a company of extremely talented people and a luscious decor, as one would not have expected from an independent Ensemble.”

” What is promised by splendid performances, rich atmosphere and great success – is once more offered by the award-winning Ensemble Theater der Klaenge in their new piece “The Baroque Theater of Masks”. So would have the Theater der Klaenge probably been – in 1716, as Gregorio Lambranzi presented his “New and curious theatrical dance school” on his juggler troupe’s wooden stage boards. The glaring red curtain. A wooden podium, eternally creaking and close by a couple of musicians, who also take on small roles in cloak and mask. Boundaries between dance and music, between silliness and grace are unknown to this theater family. The seductive mixture worked again. Grotesque, how stilted the court dances of the times appeared. Masks and costumes admirably true to detail, remarkable zest in music and movement.”

“The fact that it does not have the stiffness one would associate with a museum lies not only in the fact that a form of theater, which was thought to be lost, was brought back to life as an original happening out of sheer delight in playing and impulse to change, but also in the earnestness and freshness with which the young and professionally trained artists work. An abracadabra of the lofty, ironically captured, the comical and the grotesque or, if one so wishes, a revue of acting and dance principles from the past.”

“The components of acting, music and dance were combined together in a collage of 18 scenes: for a performance in the style of a former time, when traveling professional actors sold their talents at the market square. The colorful spectacle was well received in Heidelberg: an extended applause after the finale, which once more highlighted the complexity of the company through the amalgamation of all forms of performance styles.”

“That the theater doesn’t limit itself to perfect decor, is not only owed to the highly talented troupe. The eight actors and dancers slip at lightning speed through all Commedia dell’Arte masks. Admirable is how precisely they capture the typical Italian character of this theater form from the past. Dance master Lambranzi and his wife lead through the scenes. Through their amusing competitiveness, they embody what is also a permanent theme in the other scenes: the war between the sexes. This forever current theme has rarely been presented with such a light hand.”