I have embarked on an adventure. I can’t help it. The opportunity is there. I’m doing a ballet of lacquer for the anniversary party on December 6. I’ve said this once before. Now I’m being taken at my word. Actually, I don’t mind doing it. You can do something very attractive with simple means. Just out of coloured lacquered cardboard, balls, sticks and so on.

The former Bauhaus master Oskar Schlemmer designed a ballet of lacquer as his last stage work in the early 1940s, not in public – since he was considered a so-called “degenerate artist” at the time – a lacquer ballet. It was performed once on 6 December 1941 in Wuppertal during a festival of Herbert’s Wuppertal Farbwerke – which employed him at the time as an artistic collaborator and instructor for lacquer experiments – and has not been taken up again to this day.

The Düsseldorf THEATER DER KLÄNGE is taking the planned activities for 100 years of Bauhaus as an opportunity to deal with this “Rhine-Bergian” work by Oskar Schlemmer and to continue the idea in a contemporary form and to perform it again 77 years later. The reinterpretation is mainly about an interpretation of material and colour, as the subject of lacquer today allows for different answers than in the 1940s.

On the other hand, both the sculptural possibilities of movement and the resulting choreographies in the form of figurine dances and a final “round dance” are newly developed for a full evening program.

The “Lackballett” will be embedded in an interactive live video scenography and interactive live electronic music, as THEATER DER KLÄNGE has developed and tested since 2005 for several intermedia dance productions. In this way, the bridge from classical to digital modernity is built!

The result is a contemporary performance of colour and form, a “colour-sound intoxication” which, in combination with lacquer figurines, transforms the theme of lacquer pictures into light paintings that are constantly reshaping, overpainting and appearing different, through physical performance and music. In the spirit of Oskar Schlemmer, this is a contemporary art event, just like a dance concert!

The Lacquer Ballet in press

When the arts merge into one intoxicating union

The stage is just a black room with a big screen. Little by little, six dancers dressed in black emerge. All of them are wearing colourful cloths in their hands, in white, blue, yellow or red, about the size of sheets. They unfold them slowly, stretch them out, whirl them through the air, throw them up and catch them again or hit the floor with them. The dancers constantly shape the fabrics into new fleeting sculptures, creating the only sounds: fluttering, crackling, pulling or hitting. This is how Theater der Klaenge begins its “Lacquer Ballet” at the Forum Freies Theater (FFT) Juta. Oskar Schlemmer’s “last colour-sound intoxication”, as the piece is subtitled, celebrated its premiere on Thursday evening at Kasernenstraße 6.

The performance was created by the Düsseldorf theatre group for the Bauhaus anniversary. The legendary art school will be 100 years old this year. One of its great aims was to combine all the arts with each other. This is how the theatre also came into the sights of the Bauhaus people. Since its foundation in 1987, the Theater der Klaenge has been dealing with the stage art of the avant-garde school, reconstructing it and updating it to the present. The theatre concepts of the painter, sculptor and stage designer Oskar Schlemmer (1888-1943) have always been at the centre of attention. In his so-called “Triadic Ballet” the dancers transformed into figurines: they slipped into costumes consisting of geometric shapes. Schlemmer thus expanded sculpture: Dancers mutated into sculptures that moved through space. Sculptures were now no longer static, but changeable, flowing and fleeting. And thus also temporal, limited to the moment. Oskar Schlemmer now made sculpture ready for the stage. That was groundbreaking. It was similar with Schlemmer’s Lackballett. The artist performed it only once: On December 6, 1941, at Herbert’s company party at the Wuppertal Lacquer Factory. Schlemmer had been defamed as “degenerate” by the National Socialists. As a result, the lacquer manufacturer Kurt Herberts offered him – but also other ostracized artists – a creative refuge. He founded the so-called “Wuppertal Working Group”, where Schlemmer was to research the artistic use of lacquer paint. The all-round artist experimented with lacquered cardboard, balls or sticks. And then created the lacquer ballet that he premiered at the company party. Six ladies in costumes made of glass balls, sticks, triangles or beer mats performed a little dance to a sarabande by Georg Friedrich Händel. For lack of suitable dancers, office staff had to step in. Some guests were impressed, some surprised. The dance ended after three minutes.

The Theater der Klaenge extended the mini play to one hour. Director Jörg Udo Lensing used four-colour watercolour sketches and Schlemmer’s statements in letters as sources. With his team he created a multimedia performance. There is hardly a genre that is not taken into account: dance, sculpture, music, fashion, painting and video art.

After the dance sextet around Miriam Gronau, Cheng-Cheng Hu, Tuan Li, Javier Ojeda Hernandez, Francesca Perrucci and Phaedra Pisimisi started out by working with colorful fabrics, they now let one new figurine after another emerge. They wear square skirts made of green, blue, red or yellow lacquered “beer mats”, hats or necklaces made of colourful trapezes, costumes made of silver balls, “hooks” or hoop skirts with glowing chains of lights. When the dancers appear in ever new sculptural textiles, one feels at times reminded of fashion show spectacles. Solo, duet or group, they perform their choreographies, play with their fashion accessories, for example by turning a trapeze hat into a fan, stretch their bodies in slow motion or turn around their own axis excessively, do somersaults or do handstands. The actors alternate back and forth between dancing in slow motion, acceleration, high speed and deceleration. The moods also fluctuate between calm, poetry, melancholy, tension, drama, relaxation. Tempo and atmosphere are amplified by electronic music: sometimes the beats are stomping, so that one feels like being in a club, sometimes dramatic sounds like in a thriller, sometimes spherical melodies are floating through space and one sees oneself flying through space. Time and again, dancer Miriam Gronau also provides for meditative moments when she confronts the audience with quotes from Schlemmer, such as: “The theatre, the world of appearance, digs its own grave when it tries to make reality seem real. But the Theater der Klaenge takes its cross-artistic stage work even further: the choreographies appear as light images on the canvas – abstract, colourful, permanently changing paintings – as if painted by ghostly hands. An unforgettable ballet intoxication: sensual, imaginative, poetic, powerful – simply overwhelming!

The forgotten ballet from the paint factory

The “Theater der Klänge” brings a fascinating color-form performance to the stage of the FFT-Juta.

Oskar Schlemmer was a highly versatile artist. He not only painted, but was also active as a sculptor, graphic artist, stage designer and choreographer. His “Triadic Ballet” premiered in Stuttgart in 1922, followed by invitations to New York and Paris, which suddenly made the Bauhaus artist internationally known. Only a few people know his “Lacquer Ballet”, however, because it was only performed once: in 1941 at the company anniversary of Herbert’s lacquer factories in Wuppertal. There Schlemmer, who had been excluded from all offices by the Nazis from 1933 onwards, had condemned his art as “degenerate”, found a refuge and worked as a “professor for painting technology research projects”.

Schlemmer researched the application of modern lacquer techniques, painted a few pictures with the material and drew a lot in the lacquer factories in Wuppertal. In the process he developed new figurines for a “lacquer ballet”. “I let myself get involved in an adventure. I can’t help it,” he wrote to his wife Tut in 1941. “I’m doing a ballet lacquer for the anniversary party. . . “You can do something very attractive with simple means. …out of colored lacquered cardboard and balls and sticks and so forth.”

On the occasion of the company’s anniversary, six ladies of the company’s own gymnastics group slipped into the costumes designed by Schlemmer “made of glass balls, beer mats, cardboard forms etc.”, as Schlemmer wrote. “They did it right and bad,” the artist judged. The little dance “Reigen in Lack” lasted a little more than three minutes. Only Schlemmer’s sketches and some photos of the performance have survived.

The Düsseldorf “Theater der Klaenge” and its director Jörg Udo Lensing could not fall back on more material when he now dared an “original appropriation – continuation” of the “Lackballet”. The evening now had its premiere in the sold-out FFT-Juta. It combines Schlemmer’s dancing figurines with electronic sound (also by J.U. Lensing) and computer-generated art, which is broadcast live on a large screen (which is placed on an easel) to an audio-visual color rush, which is especially convincing in the second half.

The “Theater der Klaenge” has already gained experience with Oskar Schlemmer’s choreographic designs. As early as 1987, the ensemble reconstructed Figurinen into a “Mechanical Ballet”, which was developed at the Bauhaus in 1923. This was followed by further discussions of the Bauhaus stage idea up to Schlemmer’s “Triadic Ballet”, which the “Theater der Klaenge” adapted in 2014.

The beginning of the new, almost one-hour “Colour and Form Performance” seems somewhat too anthroposophical. Six dancers in black costumes wrap, roll and fold colourful cloths, waving them through the air as if they were colourful brushes of paint. Slowly the first colour reflexes appear on the canvas, like tender northern lights or ghostly shadows on a dark background. The electronically sensed stage makes it possible – it translates the dancers’ movements into moving colored areas, like a digital brush, thus conjuring an increasingly fascinating spectacle on the canvas.

The costumes of the figures (Caterina Di Fiore) are becoming increasingly colourful: coloured dots or areas like colour fans dominate the skirts, breastplates and headgear. The crowning glory is a fully equipped figure that looks like a colourful dragon and turns around fluently animalistically, while the other figures provide more static, geometrically inspired sequences of movement (choreography: Jacqueline Fischer). The further development of this idea leads to increasing abstraction, away from colour. Now costume pieces made of silver spheres are created, which reflect the light and almost make the figure behind them disappear.

Finally, a woman dances across the dark stage, wearing skirt and headgear made of many small LED lights. With flashlights she paints light on the walls, while the computer leaves white zig-zag on the now dark canvas, like a starry sky and sea of lights. Zero sends her greetings. Handel’s Sarabande, which ran to the premiere of the “Lackballet”, now resounds here in electronically alienated form, the figures dancing a ghostly minuet to it. Schlemmer’s theme was the human figure in space. In this new “Lacquer Ballet” it finds a delightful variation. 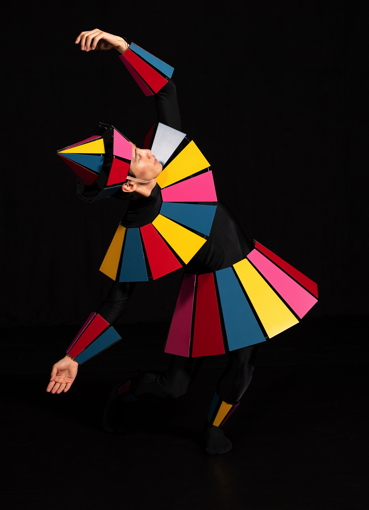 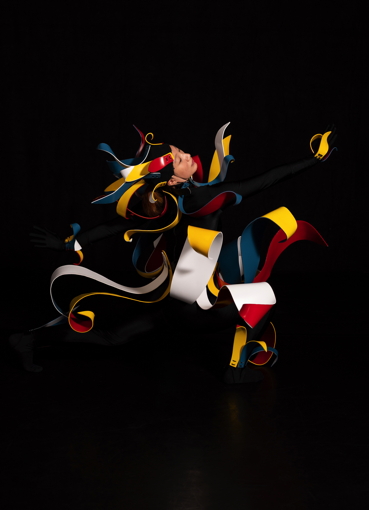 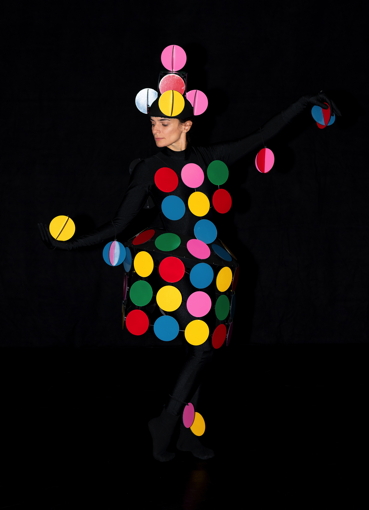 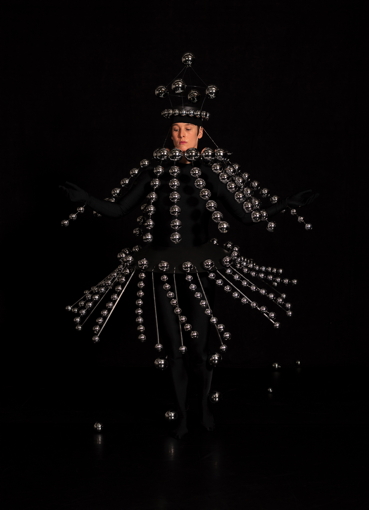 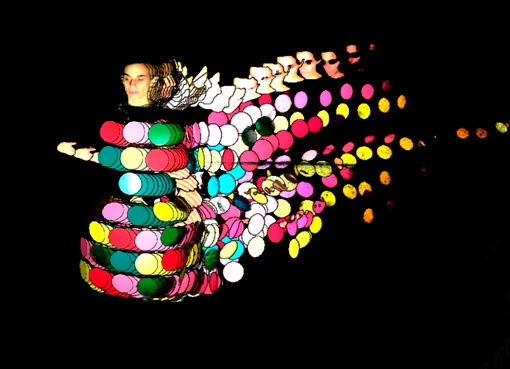 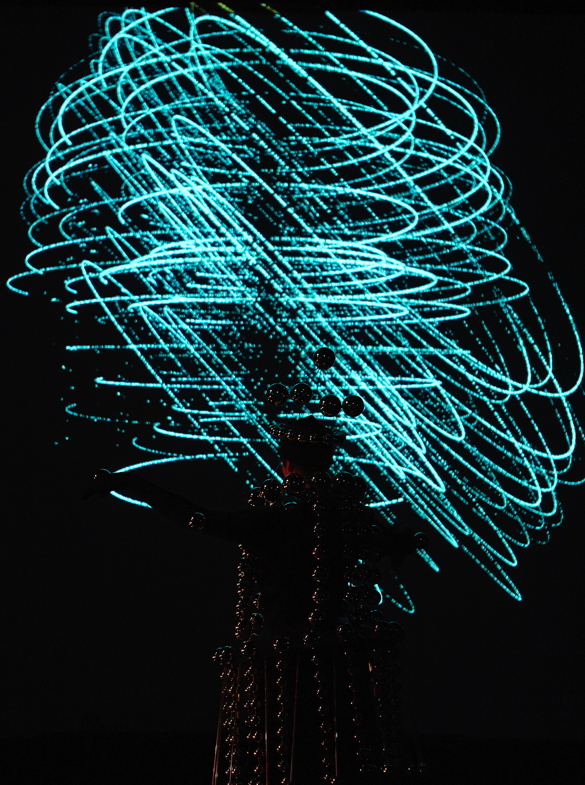 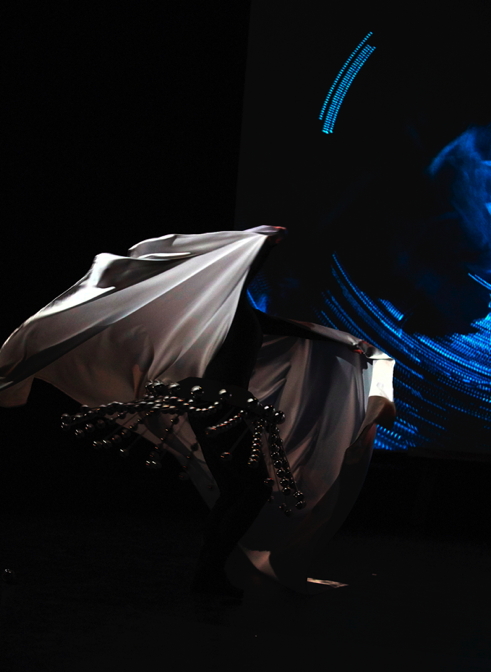 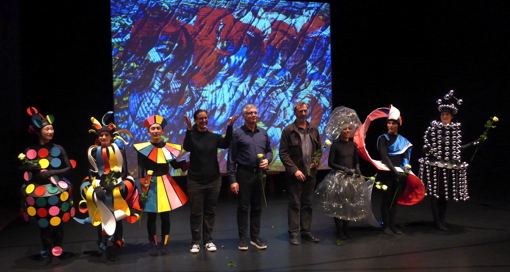 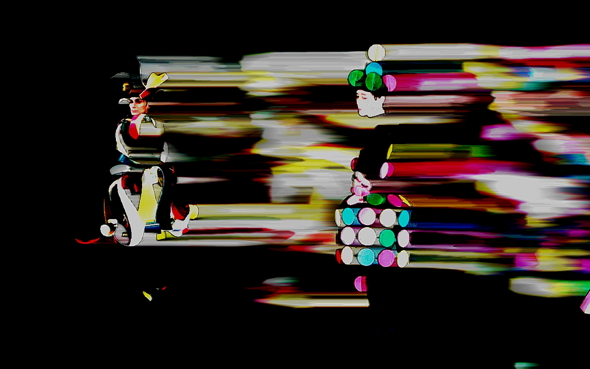