Man does not live from bread alone, he also needs the roses.

MARANGO turning to FRANK and making a gentle appeal: Why does everybody sabotage me, Frank? I give work, I pay well, don’t I ? They eat what they want, not true ? I don’t know what else one could still give a man. He works, he eats, I give him money. This is life, isn’t it ? 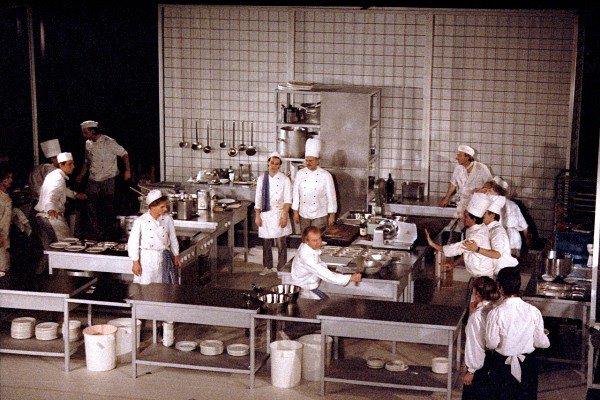 The ensemble of the premiere at the Theaterhaus Düsseldorf on November 29, 1990

“Man does not live from bread alone,he also needs the roses” – Arnold Wesker

“Die Kueche” is the title of a piece by Arnold Wesker from the year 1964, which was published in Germany in 1969 in a translation by Erich Fried. During the circumstances of the year 1990 in west Germany , it was updated and rewritten by J.U. Lensing through arrangements with the author.

“The kitchen” is the London author’s first piece. It takes place in the large kitchen of a restaurant from 7 in the morning to 7 in the evening. This environment shapes the hopes and anxieties of the protagonists, their activities, as well as their daily conflicts.

In his preface to the piece, Wesker writes: “For Shakespeare, the whole world might have been a stage, but for me it is a kitchen, where men come and go, and cannot stay long enough to understand eachother, where friendship, love and enmity are forgotten just as fast as they come into being.” Wesker was for a time a confectionner. He knows the environment of his piece: the kitchen of a gigantic dining establishment , the wear of the day on the kitchen helpers , confectionners, waiters, the cook for roast, fish, soup, broiled items, the confusion of the languages, the inferno of the clattering dishes, the whistling gaspipes, the orders and the cursing.

The piece offered the Theater der Klaenge on the one hand its first concrete involvement with spoken theater, while at the same time the potential for work relevant to the times, in view of the millions of unemployed, the influx of foreigners, emigrants, people seeking asylum, the rising animosity towards foreigners, which was and still is socially and politically highly current material.

This piece was for Theater der Klaenge close to ist own sociopolitical reality, but also a highly interresting speech composition for a large “actor-orchestra”. 15 actors and 9 actresses are for the almost two hour long performance, simultaneously actors, dancers and talking orchestra. The polyphonic text is treated in sections like a rythm and dynamics composition, while at the same time a precisely choreographed ballet of steaks, vegetable soup, and lambchops runs along.

This piece was also at the same time a first involvement with speech, to which one could in this way get closer. The Theater der Klaenge was, following this piece, in a position to develop ist own pieces based on written text. “Die Kueche” lived to see in 1990, 23 performances in the then newly opened Duesseldorfer “Theaterhaus” and was thereafter, due to the size of the production and of the multitude of the people involved , not absorbed into the repertoire.

As a consequence of the sometimes unacceptable rehearsal conditions in a warehouse in the Dusseldorf harbour which was intended for demolition (without heating, without toilets – at the site where the Gehry buildings are located today), the City of Dusseldorf granted a financial contribution towards rental costs from 1991 onwards for a rehearsal studio, which has benn operated by the THEATER DER KLAENGE in Düsseldorf-Pempelfort since 1991. “The kitchen” was also the last of the semi-professional productions that were rehearsed in evenings and on weekends. With the relocation to the rehearsal studio in 1991 and an institutional support for the Theater der Klaenge by the state of NRW from 1991 on, a fully professional work for the ensemble became possible.

“The day begins with the tired entrance of the actors, there is still time for personal teasing and trivialities between the cooks and the waitresses, which represent at least six nationalities. Text and kitchen noises are so well fitted around each other, that the spectator has no trouble understanding the words. That is “Theater der Klaenge”. Movement, words and kitchen sounds eventually swell up into a hurricane: it is now time to serve lunch, total hecticness. The public is abruptly thrown into the break. It is almost dreamlike when cooks and waitresses return to each other after their break. It is even time for a fight with ladles and egg-beaters. When the restaurant owner Marango begins his rounds again, shuffling between pots and pans, the spectator foresees: The tempo will rise again- to a hectic dinner sitting. It never gets there though. The German Peter, who on this day has dealt some, but also had to take a few, gets out of control, as the waitress Monique advises him their friendship is over. He whacks up the gas main with the kitchen hatchet. He has thereby brought the human machine, in which every individual is only a small wheel, to a standstill. Shock gives way to the pressure of the work bustle.”

“The company could have also named their production “the modern working stage”, but this time the reference is to an existing piece. When the high point of the lunch service befalls like a hurricane, the music of kitchen sounds turns into cacophony and the choreography picks up intoxicating speed. This was already a feast for the eyes in the general rehearsal, and one felt with anxiety how the pressure rises in this kitchen inferno.”

“Gigantic applause at the premiere in the theater house. It is already a work of considerable diligence, which Lensing and the Ensemble have achieved: no less than 24 actors are keeping busy in Mr. Marango’s restaurant. And when, in the huge with stoves, tables and ovens, opulently equipped kitchen, they hack away, cut, roast, it looks convincingly true to the detail. Here people are trimmed down to their function. When the waitresses bolt in, throwing the orders at the cooks, and these shout back the confirmations, a rhythm results which explains the automatism of this slave work.”

“Each single movement is perfectly integrated into the pantomimed work sequence, and culminates in the elegantly choreographed chaos of the lunch service, which closes with intermission. Almost without exception the actors are sublime: among them Joerg Balschun as Peter, Veronika Boehle as salad chef and above all the secretive leading figure of the evening, Heiko Seidel as the heavily accented Saxon “Zoni” Konrad.”

“The stage of Juergen Steger, a unique feast for the eyes, reproduces the splendiferous atmosphere of a large kitchen with swinging doors: a gray and white maze of stoves, tables, work stations and counters. Each new arrival cultivates his entrance, an international work force of Germans, Frenchmen, Englishmen, and Greeks. There is dance, flirting, beating and chatting: over work, love, life and fantasies. Two fall out of the norm: Heiko Seidel, a “New one from the other side”, from Halle. With his skillful accent he is perhaps the prize of the evening. At any rate he has the laughs on his side. Next to him only Joerg Balschun can prevail. He builds himself a triumphal arch out of buckets, pots, brooms, an unbeatable daydreamer in the image of a medieval knight.”

“Much effort was put out, in order to study the operation and to execute the true to detail, but without food, quasi pantomime. For the performance of “The Kitchen” wants to be a work of art as a whole, which shows the working world to be a hell machine in which man functions as a small wheel under great pressure. The high point comes at lunch time, during which movement escalates to a fast ballet, and acoustics to a cacophony of clatter and shouting.”

For this production we have the original merchandising package in stock in our shop. Please feel free to drop by!