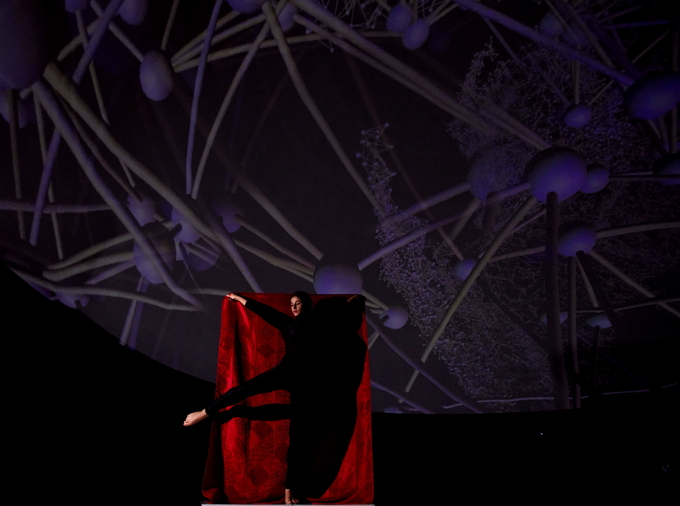 human being and art figure in a dome-theatre

the realisation of a theatre utopia

form and colour, space, movement, language and sound, idea and composition. All other independent or human-related forms of appearance on stage result from them: form as linear, plane, plastic form (scenery, props, costumes); colour as colour form, as coloured light, transparency, projection and shadow; space in its dimensions, its changeability through division and movement; movement itself as mechanical of forms and as organic of man in dance and pantomime; language as abstract sound, communicating word, designed song; the musical sound of instruments and apparatus; the idea of using the available means to design optical, mechanical, acoustic and dramatic processes. 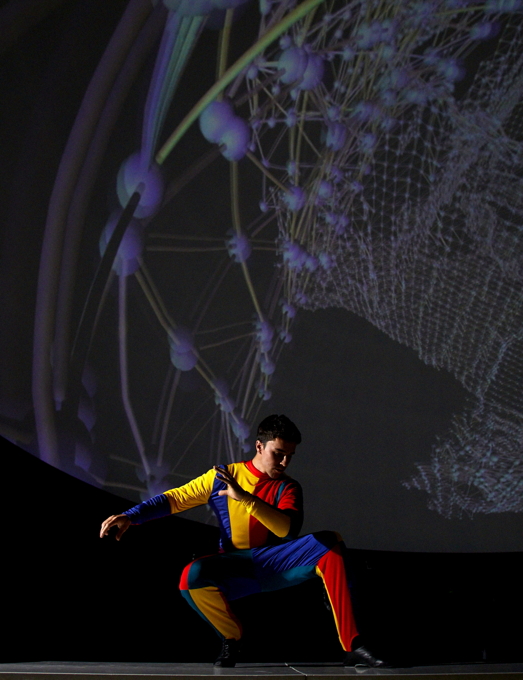 A 2020 production of THEATER DER KLÄNGE Düsseldorf in collaboration with Planetarium Bochum. Supported by the State of NRW, the City of Düsseldorf, the NPN (Neustart #steppingout), the Fonds Darstellend Künste (#takecare) the Stiftung van Meeteren, the Förderverein Klangtheater e.V., and the Landesbüro für freie darstellende Künste NRW.

In the 1920s artists imagined new theatre spaces in which new forms of theatre would be presented in the future, which would have little to do with the “old” concept of theatre. Never-before-seen technical constructions, rotating stages or numerous film projections and loudspeaker sound systems to make possible a total theatre as the world had never seen before. Most of these utopias remained sketches and were never realised. Especially because these theatres were never built and the technology of the time could not realise these visions.

100 years later things look different. In addition to theatre buildings, there are now converted former factory halls, architecturally unusual places or circus tents and much more where theatre can take place. The planetarium: also a new venue from the 1920s, the planetarium has expanded technically to such an extent, especially in recent years, that today it is possible to have full-dome video presentations with completely immersive sound in these domes. The world of theatre has hardly used these places as venues for performances, although such technically well-equipped houses are in great demand for live performances.

The artist Andor Weininger sketched such a dome-theatre at the Bauhaus in the 1920s. Also active at the Bauhaus as master at that time was the painter/sculptor and theatre maker Oskar Schlemmer, who at the same time developed a new and comprehensive view of man for his teaching.

Both works, the “Kugeltheater” and the compendium “Der Mensch” remained utopian in terms of a realisation for theatre. The Düsseldorf THEATER DER KLÄNGE uses the opportunity to develop a performance for the Bochum Planetarium in order to make both utopias a reality in a transformed form. Two female dancers, two male dancers, a choreographer, a composer, a video designer, a costume designer and a director are the ensemble which together make newly created dances, full-dome live videos, electronic music in immersive spatial audio in very specific costumes and figurines become reality in the form of a “live full-dome spectacle”.

Already with the pieces The Mechanical Ballet, The Mechanical Eccentricity, TRIAS – The Triadic Ballet and recently The Lacquer Ballet, the Düsseldorf Theater der Klaenge has proven that it can implement the Bauhaus theatre ideas from the 1920s in a sensual and contemporary form for our time. Thus, 100 years later, the theatre ideas of Bauhaus Modernism can be experienced by today’s audience in the planetarium.

human being and art figure in a dome-theatre in press