The triadic ballet which flirts with the cheerful without going to ruin of the grotesque, the conventional touches without courting with his depressions, at last Dematerialisation of the bodies strives after without redeveloping itself mystic, should show the beginnings, of the development for german ballet… 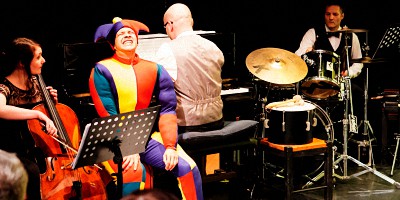 With it’s first production 28 years ago, the Düsseldorf ensemble, THEATER DER KLÄNGE, already established themselves as Bauhaus-experts. With this production they expand on earlier works, as a matter of fact, one cannot imagine a better remake of the Triadic Ballet than this most excellent adaptation. Not only a contemporary reflected Meta-Schlemmer, but also a loving historical tribute.
Nicole Strecker
WDR3 Mosaik

Düsseldorf’s “Theater der Klänge” presents a magical new interpretation at FFT Juta. The rush is impressive. For the sold out opening-night some people without tickets waited in front of the counter for hours, trying their luck. The performances on the coming weekend are already sold out.
“Trias” offers the audience an exceptional trip full of poetry and humor. The production by J.U. Lensing with Jacqueline Fischer as choreographer keeps exactly to the originaly given sequence of eleven scenes.
Fantastic figures appear: the “top hat man”, the “bell-doll”, the “disc-dancers”, the “glowing-wire-figure”, floating like a shining star fairy over the black stage. Kai Bettermann, as Cello-Clown and ruler over a complete mini-orchestra of his own, cites the revues of the “golden twenties”.
Only the final scene deviates from Schlemmer’s idea of abstraction, and follows another interpretation. Phaedra Pisimisi, Elisa Marschall and Darwin Diaz let their red, yellow and blue crinoline costumes fly. Here, the music becomes still, only the fabric’s rustling is to be heard. Until the three peel off their severe long gowns and a cheerful, physical, play of bodies unfolds.
A well rounded final chord for this uplifting ballet, that celebrates the vitality of the 1920’s and it’s unrestrained lust for dance and movement. The music plays an equal role. When they communicate with one other, then one feels how brilliantly the musicians Thomas Wansing (piano, percussions), Beate Wolff (Cello) and Oliver Eltinger (drums) play. In the end there were loud cheers from the audience for all participants.

The audience at Forum Freies Theater Düsseldorf is thrilled – almost as it was 100 years ago, when Oskar Schlemmer presented his “Triadic Ballet” for the first time. The figurines wearing a “plate-tutu” or divers’s mask, a top hat, or “spheres”, glide across the empty stage, provoking thoughtful seriousness or amusement.
Musical and scenic clownery, which are for the most part created by the 18 grotesque and surrealistic costumes, and by playing with a second and third dimension, pass in almost 90 minutes. Director (Jörg U. Lensing) and choreographer (Jacqueline Fischer) orient themselves to the original piece, and to the aesthetics of the twenties, as do the colorful costumes by Caterina di Fiore and the instrumental accompaniment by Thomas Wansing. Cello, piano, percussion and drums drive the twelve bizarre scenes forward, which even today, count as milestones for the arts.
Bottom line: Though this reduced dance performance better fits into a museum, it can certainly still be recommended to friends of the ballet and the fine arts.
Hans-Georg Müller
WAZ

Celebration in forms and colours
In the end, the dance world is ballanced again. Close to the end of the chamber ballet “Trias”, the three dancers slip off their clothes in the trias of colors red, blue and yellow and celebrate an ingenious acrobatic scene. This is how dance works today! And before, a “festival of shapes and colours”, as it is remembered from Bauhaus artist, Oskar Schlemmer, almost 100 years ago.

For the new interpretation’s opening-night on Wednesday, Theater der Klange from Dusseldorf moderated the stiff geometrical costumes from the past with more ductile materials and smooth padding. The small ensemble’s endearing answer is, that the human body is not to be crammed in a completely stiff corset. The opening night’s audience gave a long lasting applause.

Phaedra Pisimisi in her plate-skirt, began the sequence of twelve scenes quietly, with elegant arm gestures and slight tripping on the spot, almost elegiac. Componist Thomas Wansing’s musical accompaniment on piano sounded as clear as an invention of Bach. Music and movement increased like a crescendo. 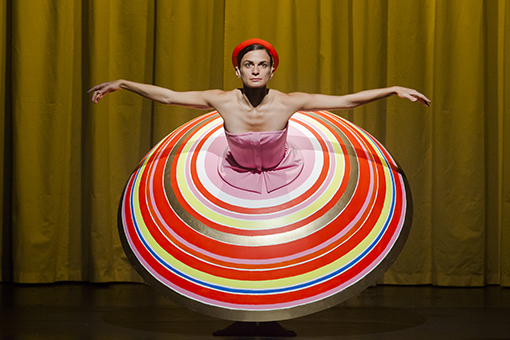 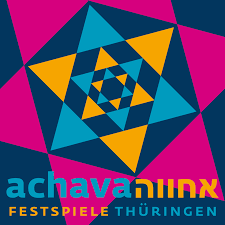 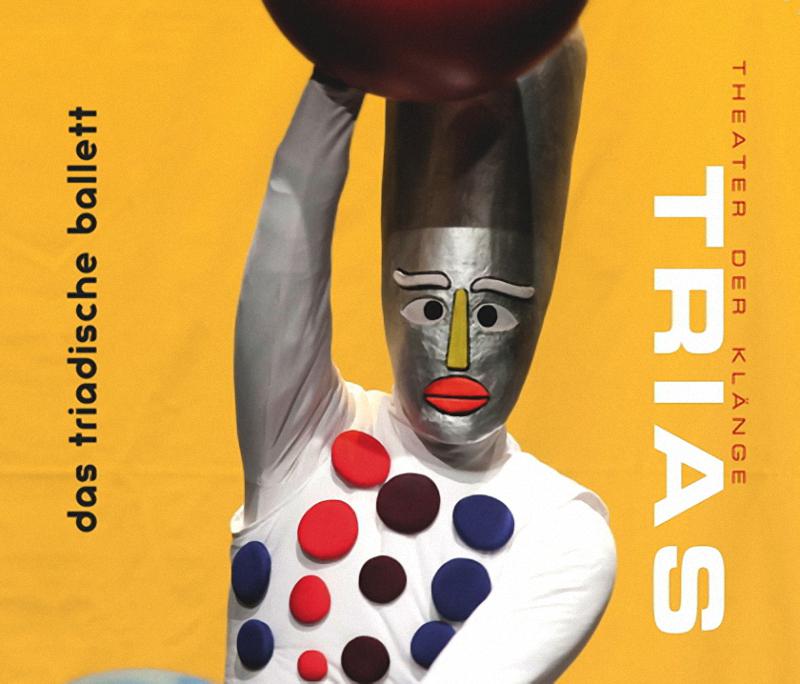 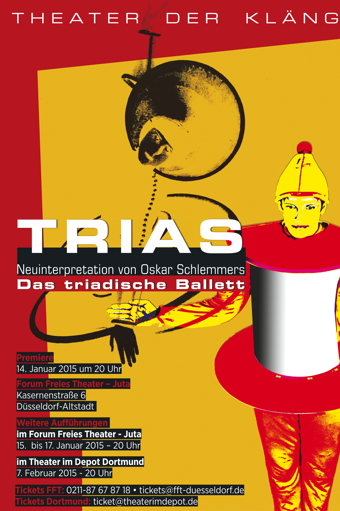 To our production "TRIAS" you can buy in our online shop the original stage music on CD and the original performance poster in two sizes.