“For me the biggest scandal of all is that a hell exists so close to home, painful and yet routine, in my own neighbourhood, where each day men, women and sometimes even children are sacrificed as a matter of course to the demands of the Leviathans and the greed of the Behemoth. I am always astonished at the way these people suffer in silence, at their quiet sighs as they force themselves to adapt to the brutal necessities of the system, as if there were no other possible alternative and anything else were unthinkable, impossible, or inconceivable.” 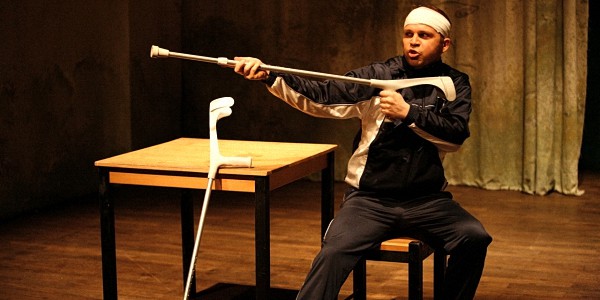 Ensemble of the world premiere on December 1, 2006 at the FFT-Juta Düsseldorf

These poor people – especially immigrants without any income – are beset by vague fears. “Dwellers in Hell” sets out to portray their feelings, desires, fears and hopelessness in the street, in prison, in court or in a cellar in the city. The play’s originality lies in the way it depicts them in all their humanity without resorting to clichés.

The Düsseldorf Theatre of the Sound has long been committed to breaking new ground in the performing arts. As its name suggests, this independent theatre group gives special importance to music and sound, and many of its performances have been cast in the form of radio art. That is not to say that the visual medium is neglected. Quite the opposite: the Theatre of the Sound has always attempted to breathe new life into traditional theatre and spectacle. Certainly, their latest project, “Vicious Circles”, plumbs the abysses of contemporary society with its stories of the poor and homeless – the outcast. 40 scenes based on 14 hours of real-life interviews reflect the fears and fantasies of these outsiders. WDR 3 – Mosaic, 4.12.2006 “Homeless people, pushing their supermarket trolleys along the road. Drug-addicts selling their bodies for their next fix of hashish or heroin. The social dregs chased off the shopping streets by vigilantes (…) this versatile theatre group completely does without the innovative, all-embracing combinations of dance, theatre and music that have so often given us food for thought in the past. Instead, the dancers flit across the stage, playing out 40 short scenes which we have all either witnessed in real life or seen in films and TV documentaries. Girls with mobile phones and trendy handbags look on scornfully as a homeless man pushes his cart through the side streets. Other girls arrange to meet a punter or are tempted into snorting coke by a girl friend who turns out to be a dealer. The bigger the fix they need, the more frantic they become, ready to steal or offer men sex in exchange for money (…) a mixture of minimalist music and soft pop electronically overlaid with all kinds of fashionable sound effects helps keep the pace going (…) The original interviews with the people portrayed are well worth listening to. There is a junky mother, who is in jail, a charwoman, who is illegally employed, a rent boy and a piece-worker from the glassworks….” Neue Rheinzeitung, 5.12.06 “Of course, we hear terrible cries behind the scenes. But even if we are curious enough to open our doors, we lock them again firmly behind us. We should not cut ourselves off from those in our society who are in need – that is clearly the message of the new production by the “Theatre of Sounds”. Like Pierre Bourdieu, Director Jörg U. Lensing sets out to study the misery of our world by interviewing drug-addicts, prostitutes, prisoners, the unemployed and the homeless. With this material he has also made an audio CD (…) Some scenes are reminiscent of silent movies, especially as the continuous tapestry of sound often has the dramatic force of film music. Other episodes are told as dance scenes, in which Jacqueline Fischer’s choreography gives an important role to violence: violence among school children, between husband and wife, against outsiders. The moments in which the acting changes almost imperceptibly into dance are particularly emotive, as when a desperate woman fights her impulse to swallow a handful of pills, or the obsessive neurotic with an apple struggles with his fear of being defiled….”

“You do not see him, the old man dressed in rags, wearing a cap with ear flaps on his head, balancing a cardboard box on a little cart with a sleeping bag inside (…) a sad street scene. Social misery in all its terrifying alternatives (…) For a few minutes the spectator makes their acquaintance and is plunged without more ado into their stories, actually experiencing the ways these people suffer (…) In fact, all these stories are about the same thing – loneliness and its capacity for destructiveness. The acting points this up very precisely without slipping into pantomime or melodrama. Stories are told through posture, gesture and mime; there is very little speech but everything is embedded in music. And not always the lush chords played on string instruments with which the work begins. Sometimes an accordion introduces a touch of French charisma and sometimes electronic sounds ring out again and again, pulsating to excruciating crescendos in scenes where violence finally gets the upper hand (…) This latest production by the “Theatre of the Sound” is thus a combination of specially written sound compositions and expressionist art, part theatre, part dance, depending on the nature of the scene (…) The ensemble commands our attention as it gives centre stage to the oppressed, making their misery visible….”

In 2006 we published a radio play at HörZeichen-Verlag at the same time as our production. Have a look at our online shop!