“We are, we want and we create!” (Oskar Schlemmer) 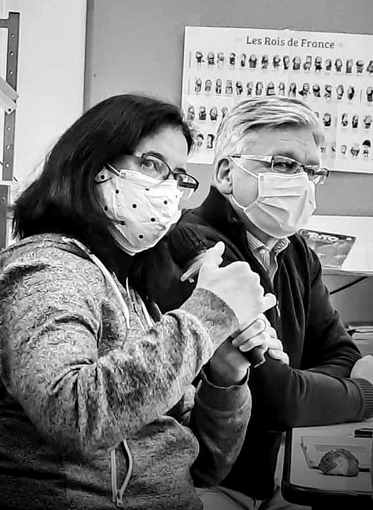 We have not been able to play in public since one year!

However, the core of our work is still not crackable… and we keep wanting to create while we are still there – so we create in a different way.

Last week, “La Galerie Chorégraphique“ in Carcassonne invited us to a transnational meeting, in the context of the EU-project “Dance Highways”, which was focusing on the topics of dance mediation and audience development for contemporary dance.

The artistic directors of THEATER DER KLÄNGE – Jacqueline Fischer and Jörg U. Lensing – were there and will continue to attend follow-up meetings in Palermo, Warsaw, Bilbao, Tromso and again Carcassone in the coming months.

“Dance Highways” is a European project that brings together six contemporary dance partners: ASDC Space Palermo (I), Fundacja Rozwoju Teatru NOWA FALA Warsaw (PL), THEATER DER KLÄNGE Düsseldorf (D), Dansearena Nord Tromsø (NO), La Fundicion Bilbao (E) and La Galerie Chorégraphique Carcassonne (F). This international project, supported by the European Union in the context of Erasmus+, aims to use a European mobility agenda until September 2022 to develop concepts for quality improvement in terms of mediation and accessibility to contemporary dance concepts.
In February 2021, a kick-off meeting was held to organise five two-day transnational meetings and a total of five five-day peer to peer workshops, until September 2022, to bring together twelve international experts and carry out innovative artistic experiences with 18 professional dancers from the DANCE HIGHWAYS consortium.
In addition, these six partners plan to launch international festivals and various dissemination programmes that will provide the opportunity to share with a wider audience the fruits of this process. In this context, we are planning to show a “dance solo with video interaction” from current THEATER DER KLÄNGE production, in Palermo at the end of May of this year.
In spring 2022, the participants of this EU programme will also be hosted in Düsseldorf to present and share fragments of their work.

Starting in June 2021, THEATER DER KLÄNGE will also be a partner of a second Erasmus+ project, organised by the DGB/VHS association “Arbeit und Leben“ Düsseldorf. The aim of this project is to initiate a debate around questions of the Artistic professional relevance discussion in the context of the current pandemic.
Other issues such as the ephemerality of performing Arts within the discourse and the mind-set of regional politics, as well as the difficulty of accessing new audiences, will be debated.
The six European partners of the project from Germany, France, Italy, Austria, Poland and Croatia will organise workshops, public events and round tables. These will provide an opportunity to discuss matters about the relevance of art – especially in the context of the Covid crisis – for society and its citizens.
Artist shall discuss these topics with their audience, or with an audience yet to be won, in order to explore ways of communicating with them about, how the value of contemporary cultural creation can be transmitted to society in our different European countries.

In addition to these European networking and exchange projects, we are of course also working on further new creations:

The scheduled première of our latest intermedia music and dance piece “Mensch und Kunstfigur im Kugeltheater“ (Man and Art Figure in a Spherical Theatre), in January of this year, has been postponed to Thursday the 6th of May 2021 at the Planetarium in Bochum city.

In the run-up to the premiere, at the end of March/beginning of Apri this year, we will be working on two video workshops focused on our dance and drama improvisational approach. Both workshop-results will be videorecorded at our rehearsal studio and will be available as an online workshop programme in the near future.

Our choreographer Jacqueline Fischer, who got the artist’s grant from the state of North Rhine-Westphalia, will interview and produce dance videos with two dancers in the coming mid-April, on the topic of the “Relevance of Dance”in the context of a social system, in order to later compile them into a dance short film. The unedited film material will be made available for a forthcoming THEATER DER KLÄNGE production.

THEATER DER KLÄNGE has received funding from the National Performing Arts Fund within the context of the “#Take Part” Programme in order to develop a “Total Virtual THEATER DER KLÄNGE” and to make it online available to the public, at the latest in September 2021. Since all of our initiatives to build our own Theatre in Düsseldorf have never been realised, we are now, after almost 35 years of activity, going to build our own (never built) space – in CyberSpace.
Our architect for this will be none less than Walter Gropius itself.

The theatrespace will be virtually accessible and will include a performance space as well as an rehearsal studio, a library and media library, a gallery, two consultable workshops, as well as a book and media counter in the lobby.

In 2021/22 we are also planning to create a new performance, which will have offshoots such as radio plays and an artistic video-documentary.

We hope that our creative work will help us get through this time, despite the mandatory social distancing period. But we hope above all, that after this long period of deprivation and as soon as we will be able to offer that (again), our audience will desire to see, hear and ideally visit live and in person our results!