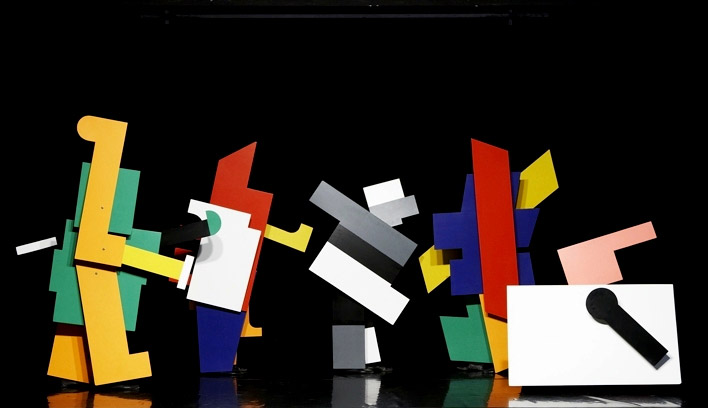 In 1987 directly after its founding, the THEATER DER KLÄNGE first dealt with the “mechanical ballet“ of the Bauhaus students Schmidt, Teltscher and Bogler. Of the three Weimar Bauhäusler only two black-and-white photos and a coloured reverse glass painting by Kurt Schmidt had survived. From these three pictures we developed the figurines to be recreated, a new choreography and a new music for a small musical ensemble.

Even though the ensemble has changed several times in the course of the 35 years since then, two people from the founding ensemble, J.U. Lensing and Jacqueline Fischer, are still active for THEATER DER KLÄNGE. Both of them also got to know Kurt Schmidt at an advanced age when he authorised the re-enactment of his idea from 1923 in several meetings (in the then GDR).

“The Mechanical Ballet” can be seen and heard once this year in NRW next Wednesday, 27 October at 7 pm in the Festhalle Viersen.

Despite its double history (1923, 1987), this piece has lost nothing of its specialness, its wit and its dancing musicality – it is, so to speak, timeless!

By the way:
Cultural live is possible again:
In Viersen currently under 3G conditions.
If you want culture, art and music to live on – even after such a big crisis – then you just have to go there!

Health Guidelines for this Event