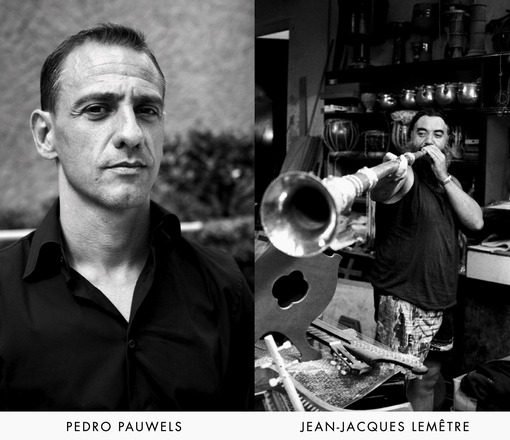 Under the title “Understanding the Art of Contemporaries”, the Düsseldorf THEATER DER KLÄNGE invites renowned international artists to Düsseldorf.
In public workshops, the invited artists will initially teach contemporary theatre, music and dance concepts to professionals from different disciplines for four days each, and both the workshop results and the artists themselves will be presented to the Düsseldorf audience in “Meet-the-Artists” salons on the last evening. In June 2022, the musicians Jean-Jacques Lemêtre and the choreographer Pedro Pauwels will be guests.

From Wednesday, 1 June to Saturday, 4 June, the all-round musician Jean-Jacques Lemêtre will be a guest in the rehearsal studio of THEATER DER KLÄNGE in Düsseldorf-Pempelfort (Winkelsfelder Str. 21). Lemêtre has been working for the world-famous Theatre du Soleil in Paris since 1979 and has developed the live music for all productions of this theatre and played as a multi-instrumentalist. His four-day workshop is aimed at performers, actors, dancers, singers and musicians who want to develop, rediscover and try out their rhythmic, melodic and harmonic skills. It also aims to strengthen the participants’ creativity, inventiveness and improvisational skills.
On Saturday, 4 June at 7 pm, both the results of this workshop and a solo concert of his music will be publicly presented in a concluding salon in the rehearsal studio.

From Wednesday 15 to Saturday 18 June, the dancer and choreographer Pedro Pauwels will be a guest at the THEATER DER KLÄNGE rehearsal studio in Düsseldorf-Pempelfort (Winkelsfelder Str. 21). Trained at Rosela Hightower’s school in Cannes, Pedro Pauwels began his career as a performer in Karine Saporta’s company and worked with Odile Duboc to found the “Projet de la matière”. He loves to mix the arts and does not hesitate to bring together theatre, hip-hop dance, improvised music and circus. He currently leads an ensemble in Montauban (F), but is also present on stages as a solo performer. His four-day workshop aims to develop dance-performative short solos using specific techniques and approaches. This course is primarily aimed at contemporary dancers, but may also be suitable for physically well-trained performers.
On Saturday 18 June at 7pm, both the results of this workshop and a solo dance performance of his work will be presented publicly in a closing salon in the rehearsal studio.

“Early bird registrations” until 21 May 2022 at the price of €80 per person per workshop (thereafter €125 per participant:

Please send information and registrations for the workshops by e-mail to info@theater-der-klange.de.