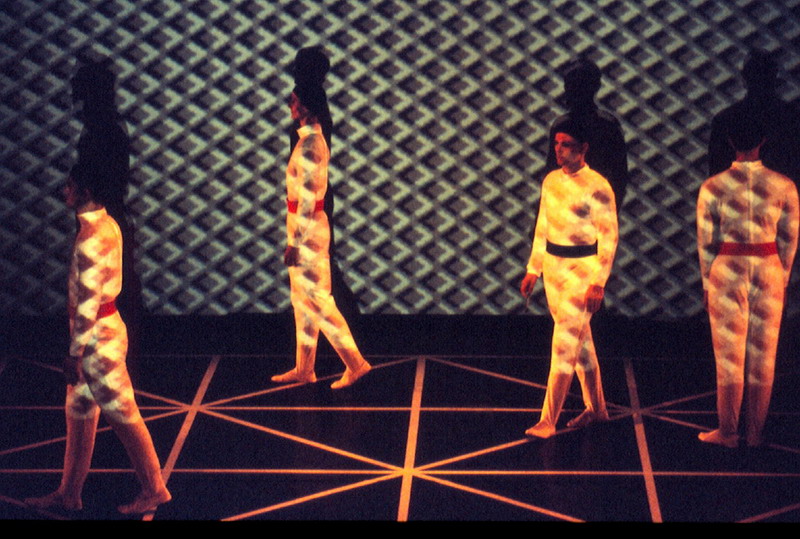 Based on Oskar Schlemmer’s “systematic stage essays” from the 1920’s, the Theater der Klaenge set itself to work on Figur und Klang im Raum, a theatrical research project which concerns itself with the “laws of the stage”: Representation, Space and Sound.

Oskar Schlemmer had engaged himself, particularly in the years from 1925 to 1928 at the Dessau Bauhaus, in a systematic “grammar of formal stage elements”, which led to several “small dances”. Despite the fact that most of Schlemmer’s pieces were written to music, a systematic exploration of the element of Sound in (the theater) space had been forgone, since no composer was found to collaborate with, and Schlemmer was himself neither a composer, nor a director specialized in speech.

The Theater der Klaenge concerned itself 1992/1993 at first with Oskar Schlemmer’s theory of “people and figures in space”, and partially adopted for itself the results of this theatrical research. Parallel to that was integrated a pre-drafted electronic installation of microphones, light barriers and ultra-sound sensors, which the composer Thomas Neuhaus had designed for Theater der Klaenge during the rehearsal process. This installation allowed direct control of electronic music and light through sound and movement occurrences on stage, therefore through the actors themselves.

By “Polyphonic scenic composition for the stage”, is meant the arrangement in time of multilayer happenings in the theater space. The most different theatrical elements such as light, sound, movement, color, gesture and mime are first understood as individual parameters, then so related to eachother in the composition, that the sum of the parameters creates the theatrical event in time. In this context, Joerg Lensing and Thomas Neuhaus have also defined the notion of an “integrative theater”.

The piece came into creation also as a collaboration with the Dessau Bauhaus. It proved itself to be so cumbersome in the rehearsal process, particularly because of the immense technical layout, that the Theater der Klaenge chose not to continue on the same path after 1993, but to turn itself instead to more “traditional” theater mediums. Nevertheless, “Figur und Klang im Raum” lived to see 32 performances to date in 8 cities, both home and abroad, and was from 1994 to 1998, combined in a reworked version with the “mechanischen Ballett” (the “Mechanical Ballet”), an integral part of the double program “Tanz am Bauhaus” (“Dance at the Bauhaus”), which also toured in Belgium, France and Israel.

In 2000, considerations on the resumption of “figure and sound in space” led to a 3-person play called “Manifesto”, which, over 5 years of development, led to the interactive, intermedia research project PCI – HOEReographien in 2005 via the productions “Megalopolis” and “Modul|a|t|o|r“. The developed approach was further developed via the HOEReographien SUITE (2009) to the SUITE intermediale (2010) and was most recently a partial component of scenic interaction in the productions VANITAS (2012), CODA (2014) and Das Lackballett (2019).

The recording of November 24, 1997 shows the revised second version of this piece in a performance in the small house of the Düsseldorf Schauspielhaus.